As I am sure all whisky aficionados know, there is only one Scotch Whisky distillery located on Isle of Mull and that is Tobermory. The distillery was established in 1798 and is one of the oldest commercial whisky distilleries in the world. They make two different brands of whisky, Tobermory and a peated whisky called Ledaig. Why I am telling you this? Well, put simply, Caermory Whisky is a third part bottling of Tobermory, with a rather interesting origin.

Caermory is available to buy at Fareham Wine Cellar.

Caermory Whisky is the only whisky made under a Business Expansion Scheme (BES), namely The Tobermory Malt Scotch Whisky BES – The Spirit of 1992 PLC. This BES, like many others offered at the time, offered investors full marginal tax relief on their investment provided the money was kept in the company for five years. Business Expansion Scheme expansions schemes were scrapped by the Chancellor the following year and replaced with the Enterprise Investment Scheme (EIS) in 1994. At the time, this must have been a very good deal, a great chance to invest in a tax-free dram. Under this BES, The Spirit of 1992 Plc. produced some 150,000 litres of spirit, the company was eventually wound up and the investors made a handsome tax free profit. However some of the whisky was acquired by private individuals, with the aim of releasing it at a much later date, one of whom, Derek Hewson, created Caermory Whisky.

The goal of this small whisky company is to release a series of very limited, single cask bottlings of this rare Isle of Mull whisky and to showcase what the very best whisky from the Isle of Mull can be like. There are plans, amongst other things for a 25 year old bottling. The BES batch of whisky was distilled in 1992 and has been quietly maturing in ex-Bourbon American oak barrels since then. The current release, the Caermory 21 Year Old Single Malt Scotch Whisky is from cask #238. This bottling is bottled at a cask strength of 48.2% abv. It takes its name from the old Welsh for stronghold, fortress or citadel and the ending of Tobermory. No such place exists, but it sounds pretty good!

Good, clear, light golden colour. The nose has good fruity and woody aromas. There are hints of lifted lemon / citrus, some floral (perhaps geranium) and minty notes. There is also a touch of green apple aroma. Alongside these fresher aromas there are also some creamy, vanilla notes with a hint of milk chocolate. There is also a note that reminds me of new rope or cereal (bran or malt). The palate is viscous with a good mouthfeel. It is fruity with baked fruit and slightly nutty flavours. It has a sweet attack and is very soft and smooth with spicy, clove flavours. The finish is clean and pure with a touch of sweetness, a final flourish of grassy notes and a good length. A drop of water reveals more fruity, baked fruit aromas, peach, orange and leathery notes. This is a very clean and pure, rich whisky with good mature character but with very elegant freshness. Very good value for money for a 21 year old from the Isle of Mull. 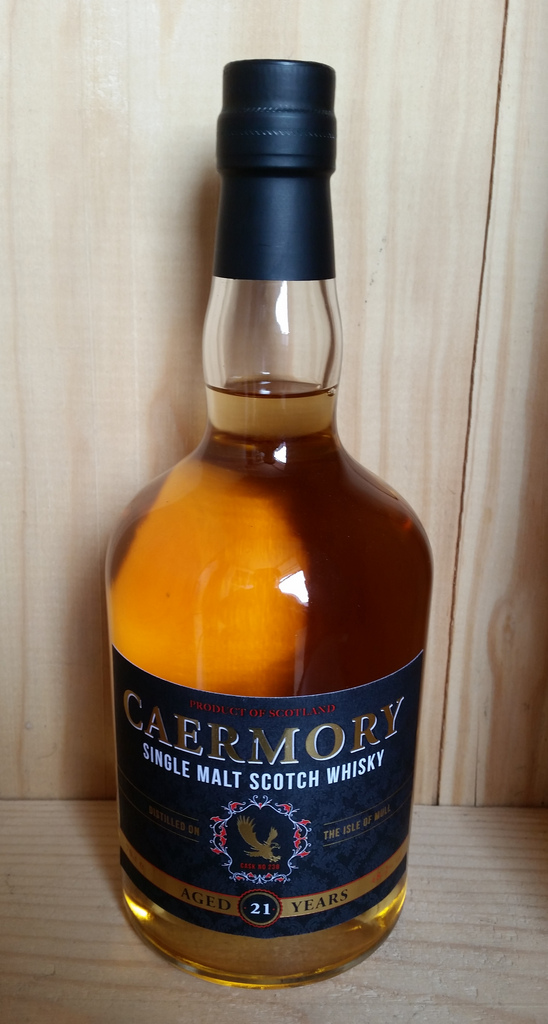 Read more about the Caermory Whisky story at their website.