Peter is the newly appointed Foursquare Rum Advocate in the UK. He is also the nose behind the extremely successful rum review website, The Floating Rum Shack.

Foursquare is one of the best rum producers in Barbados and make some fantastic rums under the Doorly’s, Seale’s and Foursquare Brands, including Foursquare’s brilliant Exceptional Cask selection. Peter will be be giving a talk about Foursquare and rum production in general followed by a tutored tasting. He will also be introducing new proposals for a new system of rum classification. 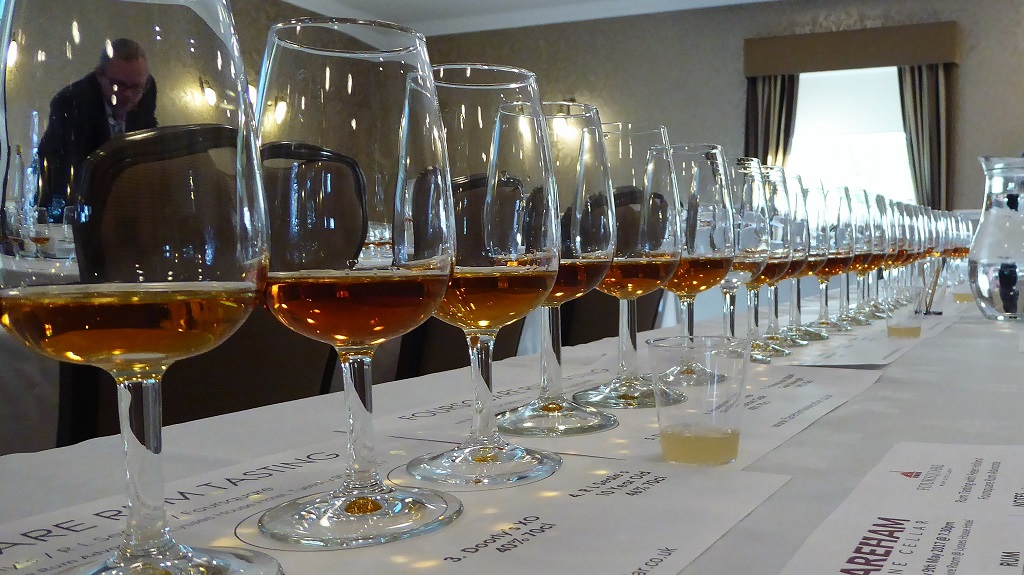 Here are my brief tasting notes interspersed with some random musings. Follow the links for more information. 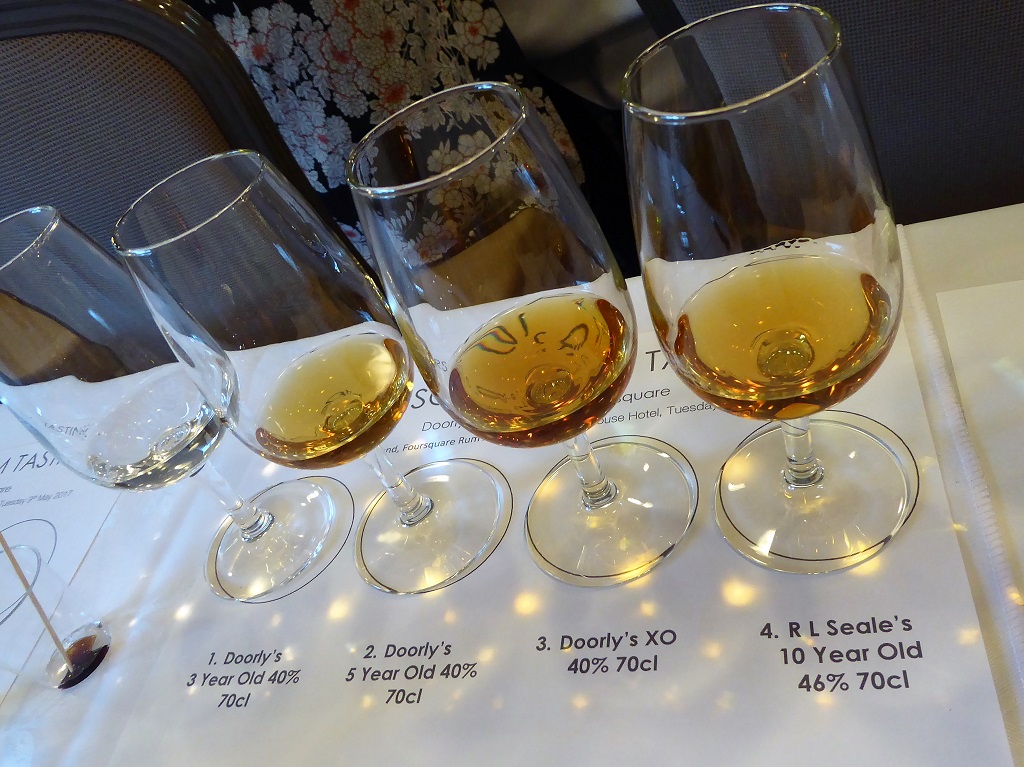 Doorly’s 3 Year Old  – Very pale straw colour. This is a grassy rum with a hint of nutty coconut, a touch of creaminess and a nice warming character.

Doorly’s 3 year old rum is aged in oak barrels and the colour is removed using a 3 step charcoal filtration process. Doorly’s do not mention that this is a white rum on the label and it is nothing like the mass produced spirit that passes for white rum most of the time. The downside with charcoal filtration is that, along with the colour, it is also taking out flavour and aroma compounds. Peter mentioned that Richard Seale would like to filter this less and less “until people start complaining”. That would be an interesting rum. This is perfect for cocktails but I could drink this neat over ice.

This is Doorly’s “entry point” rum. It is a 5 year old blend of pot and column still rums aged for 5 years in ex Kentucky Bourbon casks. A good rum, perfect for a rum and coke but good enough to drink neat too.

Doorly’s XO was one of the first rums we started selling from Doorly’s all those years ago when Marussia Beverages UK, the Eaux de Vie, starting import Barbados rums. This rum is aged for 5 years in ex- Bourbon casks and then spends another year in ex Oloroso Sherry casks. The Sherry cask influence is noticeable but not overpowering and lends raisined, dried fruit character, hints of nutty rancio character. It is a complex rum and I would be a great introduction to sipping rums for those just getting into rums. Peter describes this as a great “session rum”, I can see what he means. XO stands for Extra Old, as it does in Cognac. Unlike Cognac, there are no legal requirements for the term XO for rum!

This is what Foursquare does so well – the use of interesting cask finishes or cask-aged components in the blends of their rums, particularly in their Exceptional Cask Selection. If you think about the amount of cask finishes that are used for Scotch or Irish whiskies, it is surprising that Rum producers have not really been using secondary casks to great extent. As long as it is done well, careful selection and judicial use of used casks can add extra complexity, aromas and flavours. Teeling are doing similar things with their fantastic Irish whiskies.

R L Seale’s 10 Year Old – A very aromatic rum with sweet tropical notes, banana, vanilla, hints of nutty and baking spices. Medium weight with a dry-ish finish. I had not tried this since the abv was increased to 46% from 43% (I think). This has really beefed up the rum and adds a lot more roundness to the mouthfeel as well as giving the rum a bit more punch. This is the rum that everyone picks up because it has a wonky bottle! A copy of an old leather bottle. 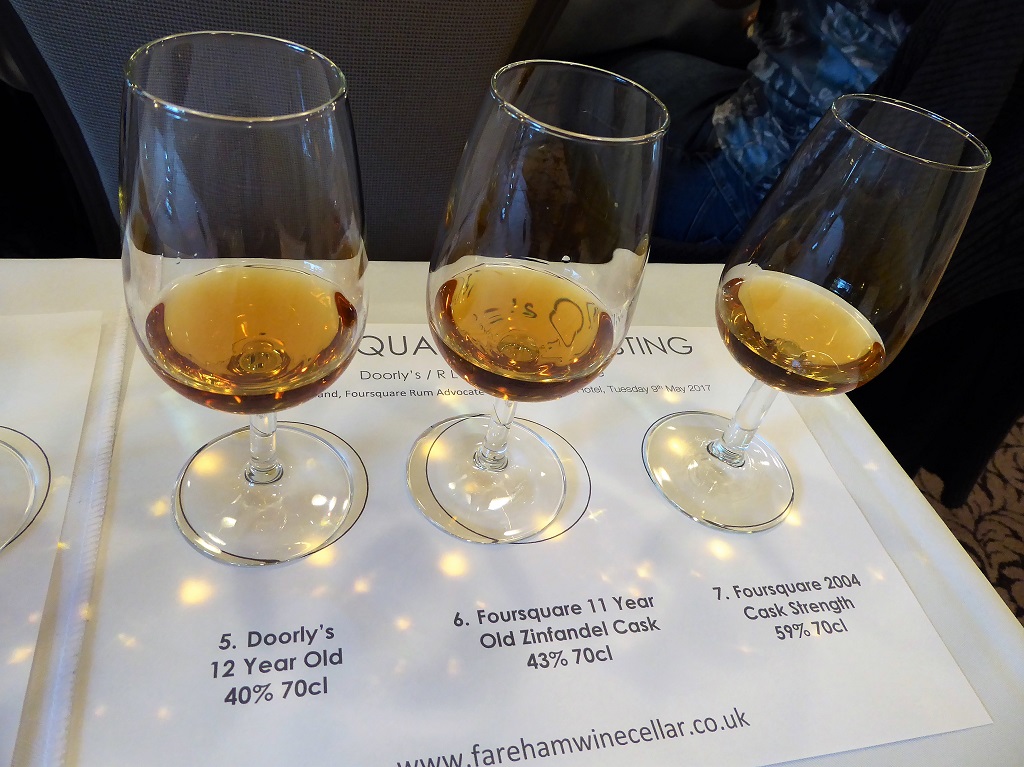 Doorly’s 12 Year Old – Dark golden colour. There are aromas of dried fruit, rancio and hints of marmalade. On the palate there are notes of caramel and coffee that I had not really detected in the other rums thus far.

This is the oldest rum that Doorly’s produce and Peter mentioned that the oldest rum at the distillery now ( May 2017, at time of writing) would most likely be from 2003 and that 12 years is about as old as Richard Seale likes to age his tropically aged rums. Don’t forget that rum aged in the tropics ages much more quickly than spirits aged in cooler climates, such as Scotch whisky in Scotland, for example. The interaction process of the spirit with the oak barrels is effectively speeded up in warmer conditions. Additonally the “Angel’s Share” (or Duppy Share) in tropical regions is around 6 to 10% compared to around 2% in Scotland or France.

As with most of the rums tasted this is a blend of pot still and column still rums. Apparently there is some Madeira cask component to the blend (hence the marmalade and coffee character I detected, I would think) and I am surprised this is not mentioned on the label anywhere. I would think this would be a good point of difference over rums.

Foursquare Zinfandel Cask – Exceptional Cask Selection Mark IV – Hints of red fruit and reminiscent of candy floss. Lots of sweet, red berry fruit character but with caramel and vanilla flavours. The finish is quite dry. This is not a sweet rum. Very well-balanced.

The Exceptional Cask Range is a series of occasional releases with different cask finishes. Again this is a blend of pot and column still rums. There are two components to the rum, a pot /column blend that has been aged 11 years in American oak and a pot /column blend that has been aged for 5 years in American oak followed by 6 years in Californian ex- Zinfandel. These two are blended to make the final product. These rums have no additives at all. All the colour is natural and nothing is added for sweetness either.

If Richard is reading this, can you get some Amarone casks?

Richard Seale has long campaigned for greater transparency in rum production and labeling and it is good to see this coming to fruition with this range of bottlings. There is a very interesting article by Peter at his website, The Floating Rum Shack, in which Peter and Richard discuss this tricky matter. I can highly recommend reading it for anyone who is seriously interested in rum and then pop over to Fat Rum Pirate’s website and check out his hydrometer tests.

Foursquare 2004 Vintage (59% ABV) – Exceptional Cask Selection Mark III – Aromatic with hints of spicy, orange citrus hints. This is very full, warming and rich with hints of brown sugar. The rum feels a little lighter due to the higher alcohol but don’t be deceived. There is a little burn, as I think there should be with spirit bottled at 50% abv, but overall the rum feels balance. Superb stuff. A blend of pot and column still rums aged for 11 years in American oak cask.

If you notice, the label on the Exceptional Cask Series says “Single Blended Rum” which leads me to the slightly controversial, although it seems to make sense to me, new proposed rum classification put forward initially by Luciano Gargano (of Italian rum bottlers Velier) who has now been joined by Richard Seale in promoting this.

The new rum classification essentially seeks to do away with the traditional classifications of white, golden, dark, French (Agricole) and Spanish style rums. This would be replaced with a system of distinguishing types of rum based on their production, either in pot still, column still or pot / column blends. The idea is communicate the quality levels of rum based on methods of production / blending rather by colour, which may be artificially added, and owes a small debt to Scotch Whisky Classification.

Obviously this classification would need to be used in conjunction with age statements and hopefully, like the Doorly’s Exceptional Cask Range, proportions of pot and column still rums and cask finishes or cask aged component used.

There is a great article here which goes into much more detail.

It would seem that I have really only scratched the surface of the rum world and that there is a lot more to learn!

Thank you very much to Peter Holland, Foursquare Rum Brand Advocate, for taking the time to come and show us a fantastic range of rums and for giving a very informative talk. I think there were quite a few people that were surprised by what a good rum could actually be. Thank you also to Richard Seale, Doorly’s Rum and Marussia Beverages for making a fantastic evening possible.