Home / spirits / Genever – What is Genever?

Genever, which is sometimes known as Jenever or Genievre, is also known as Dutch Gin. It is a strong, alcoholic spirit distilled from grain and flavoured with juniper and it is often considered to be the forerunner of the spirit Gin. Traditionally, it is made in The Netherlands or Belgium but under EU law, Genever can be produced in The Netherlands, Belgium, two French provinces and two German federal states. 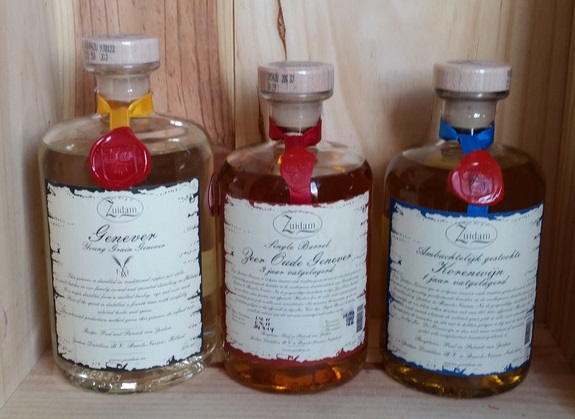 The origins of Genever can be traced back to the 16th century and was made from distilled malt wine and bottled at 50% abv. At the time, the art of distillation was fairly young and unrefined and so herbs and other botanicals were added to the distillate to cover up the flavour. Juniper was added because it was thought to have medical properties.

All Genever is made from grain (rye, corn and malted barley) and molasses alcohol and flavoured with Juniper. The grain, will be which will be a mixture of corn, rye and malted barley, is milled and then made into a mash by adding hot water. This is left for 8 hours prior to being put into a fermentation tank. Fermentation is carried out a low temperatures for about 5 days so that the resulting Genever has good fruity flavours. After fermentation the mash is distilled normally three time in copper pot stills. After this initial distillation part of the spirit is distilled again with a secret mixture of botanicals which always includes Juniper and others such as Liquorice root and Aniseed and other herbs and spices.

Oude is slightly yellowish in colour, aromatic in colour and mellower than the Jonge which is clear in colour and more neutral in characteric and flavour. This is because Oude has a much high malt content than the jonge. The Oude is often barrel aged.

Other Types of Genever

Beside Oude and Jonge there are also a few other notable types. Some companies, like Zuidam age their Oude in oak barrels and produce a three year old and a five year old. There are also Jenevers made from 100% Rye Grain, like the fantastic Zuidam Rogge Genever (rogge is the Dutch word for rye).

There is also Korenwijn which is similar to normal Genever but it is distilled four times instead of the usual three times – this means it is more delicate and subtle than others.

In Belgium it is common to see flavoured and cream Genevers with flavours such as “bessen” (redcurrant) and “citroen” (lemon).

How to Serve Genever

Genever is sometimes sipped and served over ice, or perhaps in glasses straight from the freezer. Traditionally it is served in a tulip-shaped glass filled to the brim.