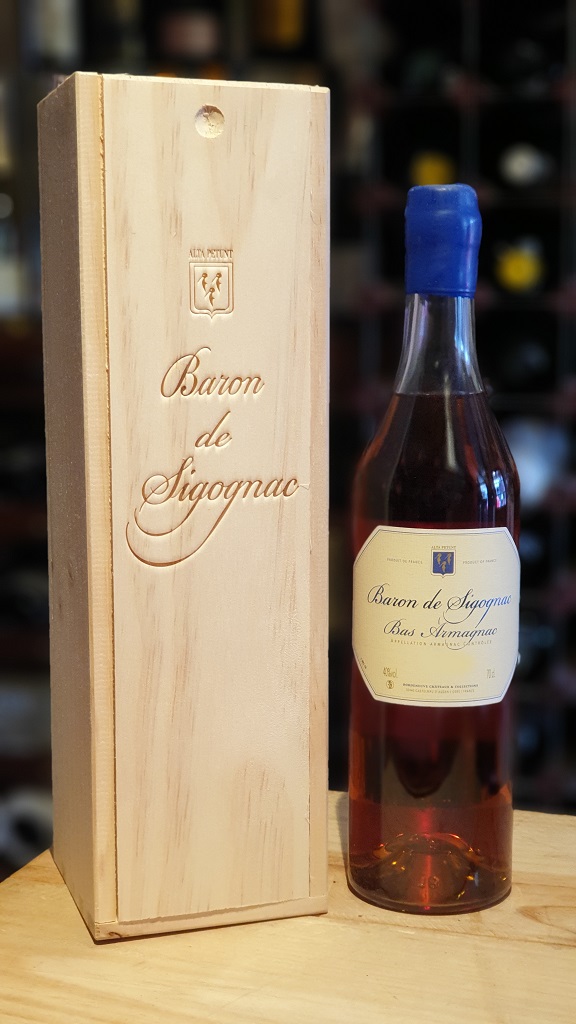 Baron de Sigognac 1999 Vintage Armagnac will make a super birthday present for anyone born in 1999. It would also be an excellent anniversary gift for anyone celebrating a significant or wedding anniversary from 1999.

Armagnac is claimed to be the oldest spirit in the world it has been recorded as being distilled and appreciated since 1411 and, in former times, was even used for medicinal purposes Armagnac is also a region, part of the southwest of France and is divided into three “sous-appellations”: Bas-Armagnac, Ténarèze and Haut-Armagnac. Armagnac, along with its more illustrious relative Cognac, are the two most famous of French Brandies.

The Owners of Baron de Sigognac, The Guasch family, have been in Gascony since the 12th century. They have owned Château Bordeneuve since 1974 and are one of the region’s largest courtier and negociant operations. Today the father-and-son team of Jean-Claude and Thomas look after viticulture, vinification and distillation. The Domaine is almost unique in the region as all its production is distilled into Armagnac instead of wine. Their vineyards are located in Bas Armagnac, which is considered by many to be where the best Armagnacs come from. There is one short column, alembic still at the Domaine (almost 100 years old), which produces up to 50 to 60 casks of new spirit annually. The wine is distilled on its lees, and drawn off at 55 to 58%, depending on the harvest. Distillation is continuous through day and night and manually controlled to account for temperature and humidity changes.

Once distilled the clear, colourless spirit is aged in new oak barrels for nearly a year. It is then transferred to older barrels for a longer, slower maturation. It is here, in barrel, that the Armagnac leaches vanillins and tannins from the toasted oak which lend the spirit colour and flavour. The depth of colour and complexity of flavour increase all the time the spirit is aged in cask, the colour can range from pale straw to rich amber. As Armagnac ages it becomes darker in colour and softer, smoother and more elegant on the palate whilst aromas and flavours of prunes, violets, fig, honey, butterscotch and rancio develop. Part of the alcohol evaporates naturally during the long years in cask – this is known as “la part des anges” (the angel’s share).

Baron de Sigognac 1999 Vintage Armagnac is only available in strictly limited quantities and is presented in a wooden gift box.

January 1st – The euro currency is established and the European Central Bank assumes its full powers.

May 19th – George Lucas’ 4th Star Wars film (Star Wars: Episode I – The Phantom Menace) is released in the US, which begs the question, why wasn’t released on May the 4th?

January 3rd – The Mars Polar Lander is launched by NASA

A complex bouquet, showing freshness and aniseed aromas, which reinforce notes of vanilla and clean spearmint, exotic fruit and cocoa.

In the mouth, it is well balanced with good structure and rich flavours of roasted coffee beans, quince and then pineapple and vanilla bean on a long finish.