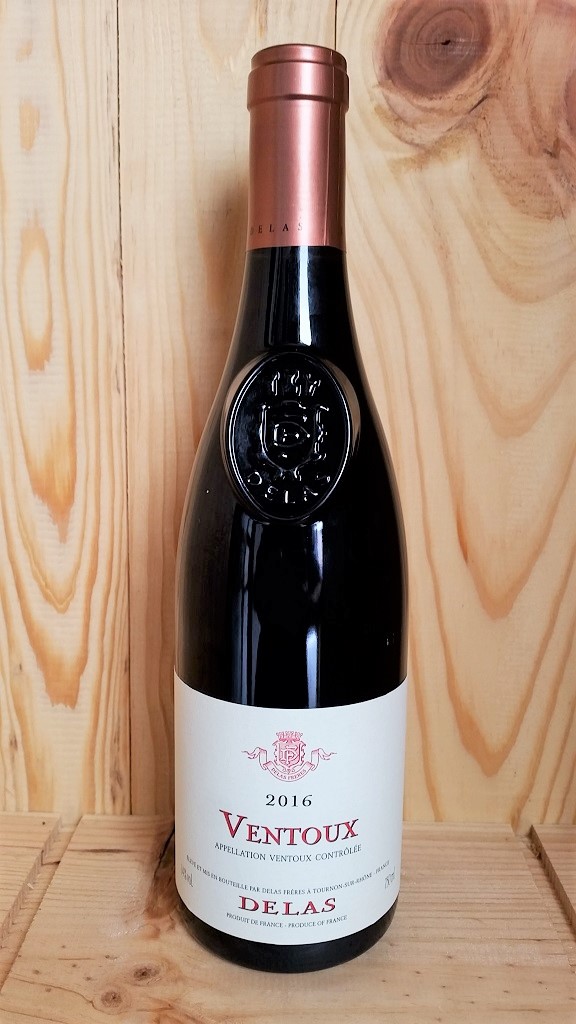 Delas Freres Ventoux is a red wine blend made with grapes from the south eastern region of the Rhône winegrowing region of France. It is bottled as a Ventoux AOC, which was previously known as Côtes du Ventoux AOC until 2008. Delas Freres are one of the most prestigious Rhone wine producers and make superb wines, from a wide selection of appellations, in both the northern and southern Rhône including Hermitage, Crozes-Hermitage, Chateauneuf-du-Pape, Côte Rôtie, Condrieu and Côtes-du-Rhône.

The company was founded in 1835 when Charles Audibert and Philippe Delas bought Maisons Junique, a 40-year-old winery which they renamed Audibert & Delas. Philippe Delas had two sons, Henri and Florentin. The latter married the daughter of Charles Audibert, further strengthening the bond between the two families. In 1924, the brothers succeeded to the founders and changed the name of the house to Delas Freres. The company grew and in 1981 relocated to the its current premises in Saint Jean de Muzols, a small village located two kilometers north of Tournon in the Saint Joseph appellation. In 1993 Delas Frères became part of the Champagne Louis Roederer group.  2020 saw the completion of a new state of the art winery and house in Tain Hermitage where all of the top appellation wines are vinified and aged, underlying their commitment to producing the highest quality wines. Since 2013 they have been working organically, but are not yet certified.

Delas Freres Ventoux is a blend of Grenache and Syrah grapes which are sourced from the communes of Mazan and Goult from vineyards which stretch out along the left bank of the Rhône river, around the limestone outcrop of the Mount Ventoux. The Grenache grapes are fermented in stainless steel vats with a daily pumping over to allow gentle extraction of the phenolic components. The Syrah is sometimes left on the stems in order to fully express its characteristic fruit aromas. The two components are blended before they wines is matured for 6 to 8 months in Delas’ air-conditioned winery before bottling.