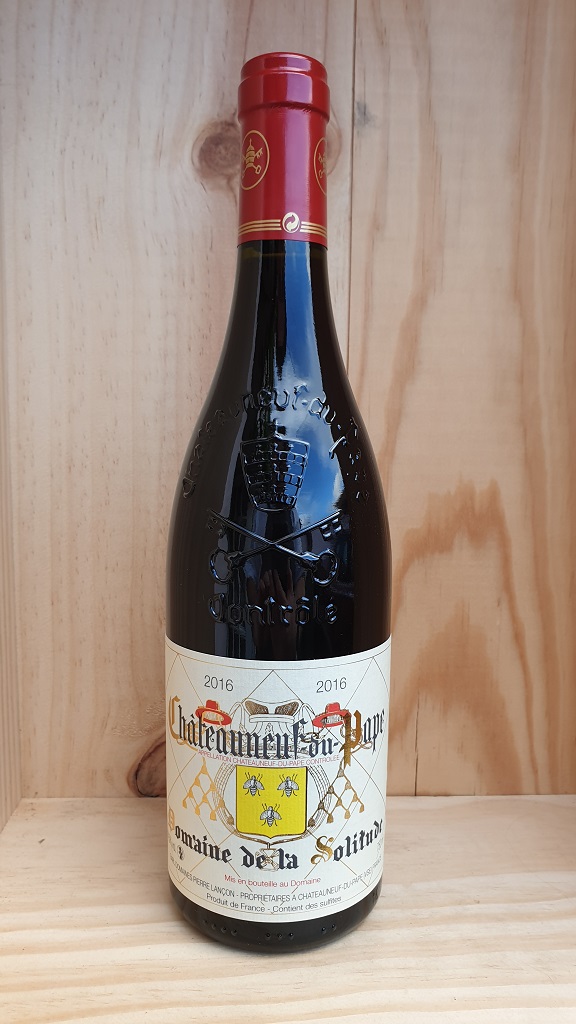 Domaine de la Solitude Chateauneuf du Pape is one of the more famous wines of the region with a rather long history of wine making at the estate dating back to the 13th Century. It is quite a well-known fact that Chateauneuf du Pape could be a blend of up to 13 different grape varieties. In fact, since the Chateauneuf du Pape AOC rules were rewritten in 2009, there are 18 varieties permitted with white, pink and black varieties of the same grape now listed separately. The blend is normally around 50% Grenache, 25% Syrah, 15% Mourvèdre and 10% Cinsault.

Wine making at Domaine de la Solitude began in 1264 when the Italian Barberini family arrived from Tuscany to serve the pope in Avignon. Eventually a daughter of the family, renamed Barberin to sound more French, married into the Martin family, winemakers in the area. The Martin family were the first to sell the wine as “Vin de la Solitude”, way before Chateauneuf du Pape existed. Today their descendents, the Lancon Family, still own and manage the estate. The label depicts three hats depicting the two bishops and a pope that were also part of the family. Brother Jean and Michel Lancon are in the process of handing over the reins of the business to Michel’s son, Florent. Florent is an innovator but also respects the centuries of tradition at the estate. Recently Florent has acquired some tulip-shaped concrete vats which were initially designed for Cheval Blanc and are at the cutting edge of wine making technology.

Today Domaine de la Solitude comprises some 38 hectares in the Châteauneuf du Pape appellation. It has some of the best terroirs in the region with the soils with an abundance of rounded quartzite stones from the Villafranchian period. These famous vineyard stones absorb heat during the day then radiate it at night, promoting full grape maturity.

The grapes for Domaine de la Solitude Chateauneuf du Pape are hand harvested and then at the winery, following a selection of the best bunches, the grapes were meticulously sorted, destemmed and gently crushed, before entering concrete fermentation tanks via gravity. The grape must was macerated for approximately 30 days, with a gentle extraction to obtain velvety tannins. Approximately 25% of the wine was aged in 225L oak barrels, demi-muids (6o0L) and large oak foudres for 14 months prior to bottling.

This wine is suitable for vegetarians and vegans.