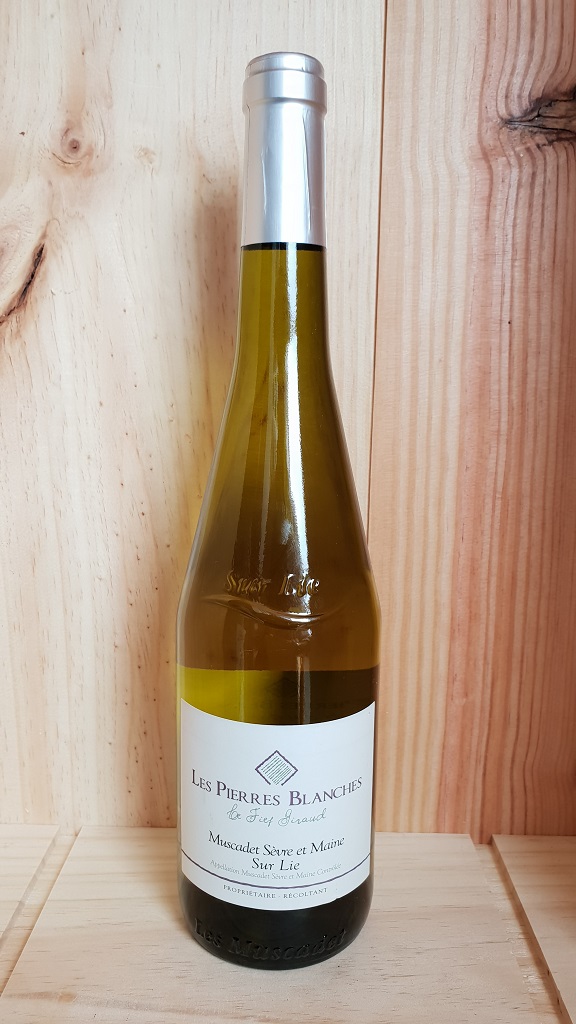 Domaine E. Poiron Muscadet Les Pierres Blanches Le Fief Giraud is a white wine from the Loire bottled as a Muscadet Sèvre et Maine AOC Sur Lie. The Muscadet Sèvre et Maine appellation was established in 1936 and comprises over 20,000 hectares of vineyards over 23 villages – 80% of Muscadet produced comes from this appellation. “Sur Lie” refers to the fact that this particular Musadet is aged on the lees (the spent yeast cells) which adds more texture and complexity to the wine.

Owner Eric Poiron took over the running family domaine (then known as Domaine Henri Poiron) fairly recently but the domaine can trace its wine-making roots back to the nineteenth century. Eric is a graduate of the Beaune School of Viticulture and is dedicated to bringing the winemaking lineage and heritage of Muscadet into the 21st century. The estate is located in the heart of the Muscadet wine region near Nantes and has evolved from a small holding of 1.2 hectares in the 1800s to its present day size of 36 hectares.

In 1947, the Poiron family were some of the first producers in their region to develop and establish direct sales of their wines via export. Today Eric Poiron, a graduate of the Beaune School of Viticulture, heads the business and carries the fantastic lineage and heritage of Muscadet winemaking into the 21st century. The family own and carefully cultivate two separate properties: Domaine des Quatre Routes situated in Maisdon sur Sevre and Domaine du Manoir, situated in la Chapelle Heulin. Domaine des Quatre Routes is nestled in one of the finest hillsides between the rivers Sevre et Maine, produces fine, light and fruity wines. Domaine du Manoir can be found in the heart of the Nantes région, in the charming village of La Chapelle Heulin. Thanks to quality soil and the exceptional exposure of its vineyard, the wines are fruity and fragrant.

Domaine E. Poiron Muscadet Les Pierres Blanches Le Fief Giraud is made from 100% Melon de Bourgogne sourced from old vines (an average of 50 years old) and is left on the lees prior to bottling to preserve its youthfulness.

This wine is produced according to the principles of Terra Vitis. Terra Vitis brings together winemakers from all over France who are strong proponents and active users of sustainable winegrowing and winemaking techniques.

Poiron also makes a great Gros Plant (a perfect match for oysters) and some Muscadet Cru Communaux including the Goulaine and the Monnieres Saint Fiacre.

Muscadet Les Pierres Blanches Le Fief Giraud is perfect with any seafood and, in particular, shellfish such as mussels, clams, oysters and many more.