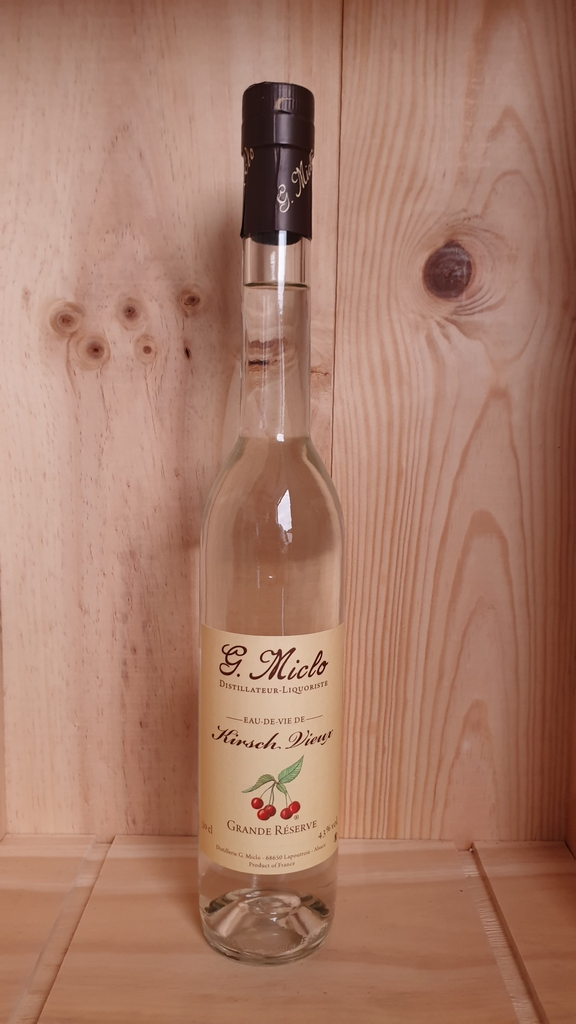 G. Miclo Vieux Kirsch d’Alsace Eau de Vie Grande Reserve is a cherry flavoured spirit. An Eau de Vie d’Alsace has to be aged for a minimum of 4 years to be classified as a Grande Reserve. Their “standard” Kirsch Tradition is aged for 2 years.

Gilbert Miclo founded the Miclo Distillery in 1965 in Alsace. It is located in the Alsatian village of Lapoutroie.  He had succeeded his father as head of the family company in 1962; in those days they were only traders of wine, Eaux de vie and beers. The decision was taken to produce their own fruit brandies, and to concentrate on only products of the very finest quality. The company immediately became well-known and by 1972 Miclo had 50 agents selling its products throughout France. Miclo also caught the attention of master patissieres – who wanted the purest fruit brandy for flavouring their fine pastries and desserts. In 1977, a new distillery was built housing four stills and 36 new Inox stainless-steel tanks for macerating the fruit and ageing the brandies. In 1985 Miclo purchased an additional distillery in Alsace, and expanded its product offering even further. Today, under the stewardship of Gilbert’s grandson Bertrand, the distillery uses more than 2,000 tonnes of fresh fruit and produces around 200,000 bottles of brandies, liqueurs, fruit creme liqueurs, vodka, whiskies and aperitifs each year.

G. Miclo Vieux Kirsch d’Alsace Eau de Vie Grande Reserve is a fruit brandy made by fermentation and then distillation of sweet black semi-wild cherries with small stones. Only the best vats, aged for 4 years, are selected to become a Grande Reserve.