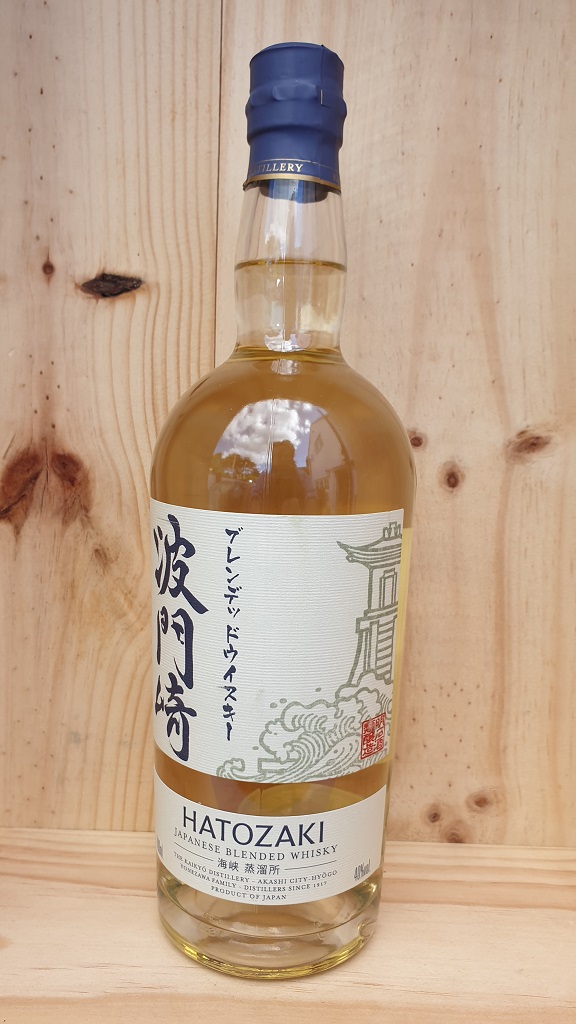 Hatozaki Blended Japanese Whisky is premium blend of whisky aged up to 12 years in barrel. It is the first of two releases, alongside the Hatozaki Pure Malt Japanese Whisky, from the Kaikyo Distillery. It has a minimum malt content of 40%.

Hatozaki is an exciting new Japanese Whisky project made by the Kaikyo Distillery which is located in the town of Akashi, Hyogo, Japan. Here is where it gets a little bit complicated, Kaikyo Distillery is based at the historic Akashi Sake Brewery whose Sake is well known via their Akashi-Tai brand. However there is already a Japanese whisky produced by different Sake brewery producing a whisky called Akashi. So to save any confusion, whisky produced and/or bottled at Kaikyo Distillery will be known as Hatozaki (although future single malts will be bottled as Kaikyo). Hatozaki Whisky is named after the nearby Hatozaki Lighthouse, the oldest stone lighthouse in Japan, in operation since 1620. Kaikyo Distillery is named after the famous is Akashi-Kaikyo bridge which lies in front of the distillery. Clear? Good.

The Yonezawa family have been brewing Sake since 1856 and began distilling in 1917. The company was acquired in 2016 by Mossburn Distillers & Blenders (a new independent Scotch Whisky company) and, with their 100th anniversary of distilling approaching, Mossburn installed two new alembic stills made by the old Scottish firm of Forsythes to secure the future of whisky production at Kaikyo.

As mentioned above, Hatozaki Blended Japanese Whisky is a blend of whisky aged up to 12 years in barrel. Although Japanese labelling regulations allow the naming of the constituent whiskies, Hatozaki does not, as it will allow them more flexibility going forward. It is most likely that the proportions of the blend will change, according to the age of the components as particularly when Kaikyo’s own whisky comes online. Initially this is a blend of Japanese whiskies sourced from two different Japanese distilleries (until Kaikyo’s own spirit is old enough to be whisky) and some Scottish Malt for taste profile. The whiskies are aged in a combination of casks including Bourbon, Sherry cask, some Japanese native Mizunara oak barrels and some hybrid casks including those with cherry wood heads (not possible in Scotch production, of course).

Many argue that the success of Japanese whisky has been in the skill of blending. All Hatozaki whiskies undergo a two stage blending process. The master blender first selects component whiskies to make two foundation blends (No 1 and No 2). These are blended and then left to mature and marry quietly in in cask, whilst being constantly monitored as they mature. When ready these two foundation blends are blended, in different proportions depending on how they mature and develop, with other individual whiskies to add florality, depth and finesse to the blend. The final blend is then allowed to marry again for a period in cask prior to bottling. All the stock is lying, and the blending carried out, at their Akashi warehouse.