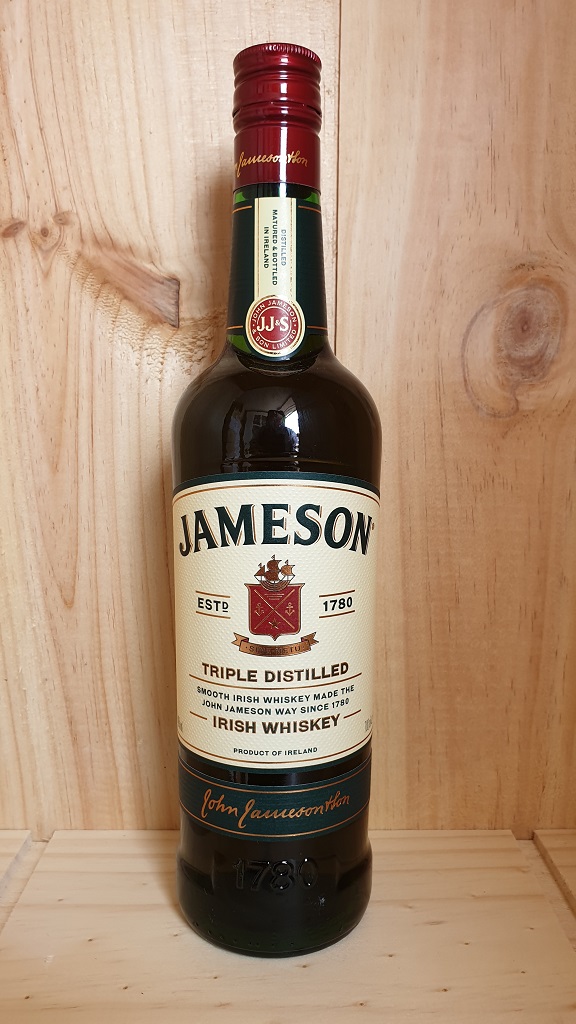 Jameson Irish Whiskey is probably one of the most famous, and certainly the best-selling, of blended Irish whiskies.

John Jameson, a lawyer from Scotland founded the Jameson Distillery and the first whiskey was distilled there in 1780. The distillery remained in family hands until 1966 when the company merged with Cork Distillers and John Powers to form the Irish Distillers Group. In 1988, the Irish Distillers Group was eventually sold to French drinks giant Pernod Ricard, who remain the current owners. Today the distillery producers Jameson, Midleton, Powers, Spot Whiskies and Redbreast.

Jameson Irish Whiskey is produced from a blend of grain whiskey and single pot still whiskey, which uses a mixture of malted and unmalted or “green” Irish barley, all sourced from within a fifty-mile radius around the distillery in Cork. The barley is dried in a closed kiln fired by natural gas – this ensures that smoke does not come into contact with the grain and that the natural taste of the barley shines through in the final whiskey. This is unlike the Scotch production process (common in Islay) in which peat smoke is sometimes blown through the malt thereby giving it smoky, peaty character.

In Ireland, one of the secrets of making whiskey lies in the slow, triple distillation in copper pot stills. This method of distilling gives Jameson Irish Whiskey its remarkable smoothness and round flavour. Other whiskeys are distilled only once or twice. The mellow, sweet taste of Jameson Irish Whiskey is attributed to the length of time  the spirit is allowed to mature in seasoned American and Sherry oak casks and Port Pipes that are stored for a minimum of 4 years in cool, dark, aromatic warehouses. Single distillery, triple-distilled, twice as smooth & perfectly balanced.