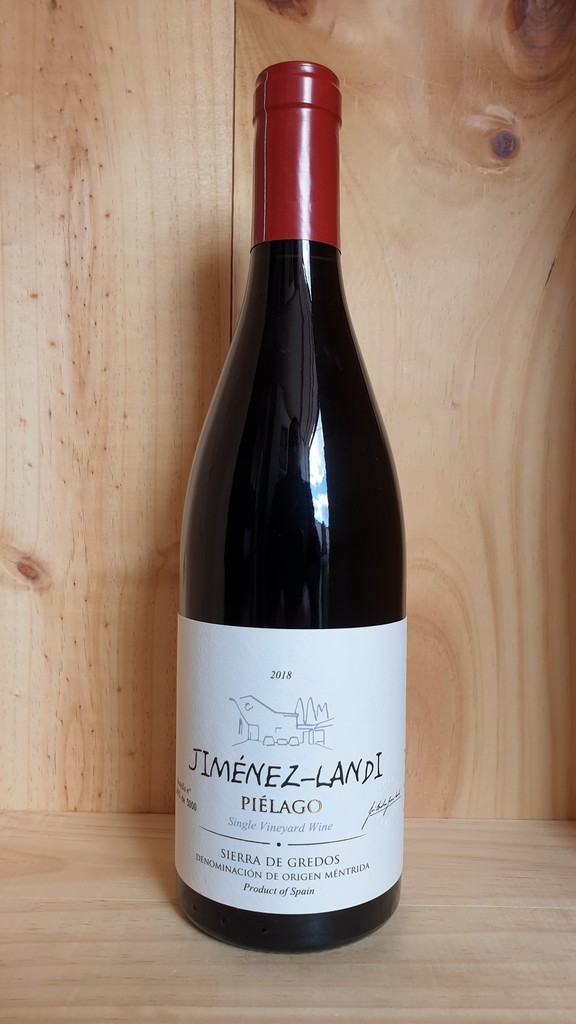 Jimenez Landi Pielago is a single vineyard red wine is a Spanish red wine categorized as a “Vino de Pueblo”, or village wine, which is produced in the Denominacio de Origin Mentrida wine growing appellation. Located to the south-west of Madrid, DO Mentrida covers many municipalities in the north-east corner of the province of Toledo in Castile La Mancha. The DO was established in 1976 and the red grape Garnacha (also known as Grenache) accounts for 80% of plantings.

Family owned Bodegas Jimenez-Landi was established in 1961 when husband and wife Antonio Jiménez-Landi Martínez De Ojeda and María Luisa Usunáriz Sanmartín De Capistrós bought Dehesa del Romeral and planted vineyards in the surrounding area. In 1963, in partnership with Helios Sainz, a wine producer from Valencia, the winery buildings were renovated and modern equipment was installed throughout. Sainz left the business in 1980 and the son of Antonio Jiménez-Landi Martínez, Pedro Antonio Jiménez-Landi Usunariz took control of the estate. In 2004 the entire wine-making operation was revamped and equipment renewed once again and son of Pedro Antonio, Jose Benavides Jiménez-Landi, and his cousin, Daniel Gómez Jiménez-Landi, began a new project to produce, terroir-driven Garnachas but with the utmost respect for the environment. Daniel left in 2012 to begin his own wine project. Today the winery is widely recognized as being expert producers of Garnacha using 21st century wine-making whilst respecting history and tradition.

The estate has two main vineyard locations in the villages of Mentrida and Real de San Vicente. There 15 hectares of vineyards in Mentrida have vine ages of between 12 to 40 years old. These are situated at an altitude between 550 and 650 metres above sea level. The climate is extreme continental with very hot summers and long cold winters with some shelter provided from the cold, north winds provided by the nearby Sierra de Gredos mountain range. The soils are mainly of granitic, sandy composition. There are another 5 hectares vineyards consisting of very old Garnacha located in Real de San Vicente with ages between 40 and 70 years old, located between 750 and 850 metres above sea level. These are small plots on sandy granite soils of siliceous origin and are organically farmed.

The grapes for the Jimenez Landi Pielago are sourced from plots of vines in the village of Real de San Vicente. Wine-making is carried out by hand. 100% Garnacha grapes are manually harvested and undergo a period of cold maceration for 4 days. There follows a fermentation using indigenous yeast at a controlled temperature of between 15 and 22C. There is a period of maceration between 20 and 40 days depending on the plot and there is gentle extraction by pumping over.

The wine is named after the Pielago mountain which overlooks the vineyards of Real de San Vicente.

Be the first to review “Jimenez Landi Pielago, DO Mentrida” Cancel reply