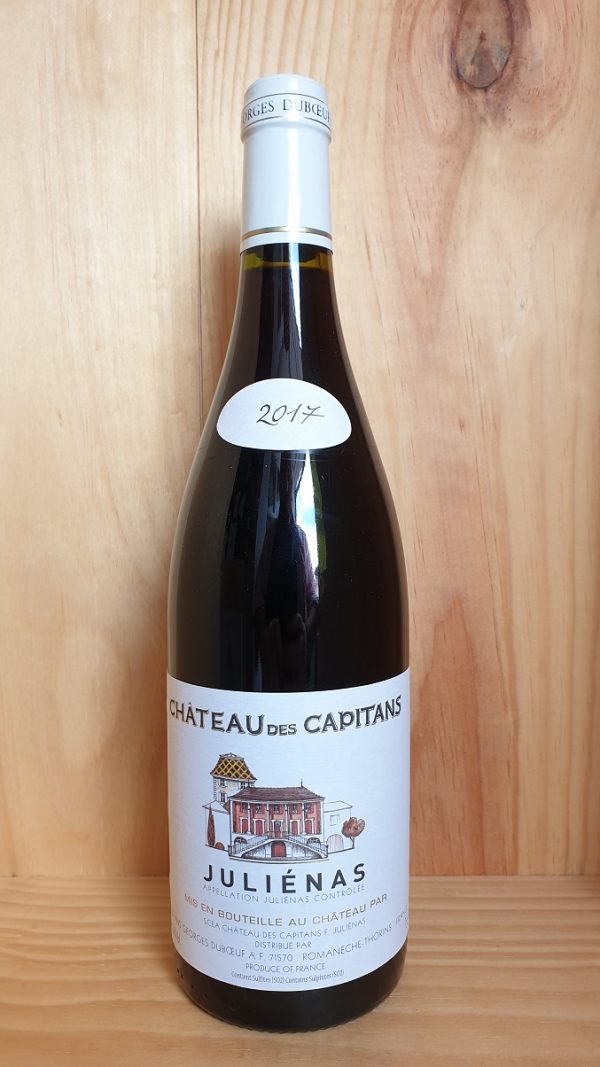 Julienas Chateau des Capitans is produced by Georges Duboeuf, often described as the King of Beaujolais ( le roi du Beaujolais), and also its most tireless ambassador. Duboeuf was born in 1933 and worked in on his family farm which had a few acres of vines. Eventually he founded a syndicate of some 45 Beaujolais growers, the Ecrin Mâconnais-Beaujolais, to supply a network of restaurants he had built up and was supplying to. When this fell apart, in 1964, he founded Les Vins Georges Duboeuf as a negociant. The rest, as they say, is history. Today his son Franck takes care of the business.

There are 10 crus in Beaujolais. In alphabetical order they are: Brouilly, Chenas, Chiroubles, Cote de Brouilly, Fleurie, Julienas, Morgon, Moulin A Vent, Regnie and Saint-Amour. The vineyards of the cru of Julienas are based around the village of the same name which, in turn is named after Julius Caesar.  Juliènas is always considered to be one of the fuller, deeper Beaujolais with more lasting power than some of the other Crus and it is said to have a fragrance of peonies. Both Regnie and Julienas lay claim be to site of the first vineyards planted in Beaujolais by the Romans

The nineteenth-century Château des Capitans is situated in the heart of the Juliénas cru, in the hamlet called Les Capitans. The property was bought in 1907 by Claude Condemine. 4 generations later, it is run by Thierry Condemine. The vineyard consists of a single seven-hectare block, lying at 320 metres above sea level, and with an ideal south-south-east exposure. The soil is made up of granite, clay and alluvial silt. The must was fermented at 20-30ºC, and twenty percent was aged in oak.  Thierry Condemine uses responsible growing methods with minimum spraying and the grapes are picked by hand.

From DuBoeouf: “displays a sumptuous deep red colour. Its complex nose offers an array of fruits, from peach to raspberry and black currant, with a subtle touch of cinnamon. Ample structure and excellent balance will allow this wine to age in bottle quite gracefully.”