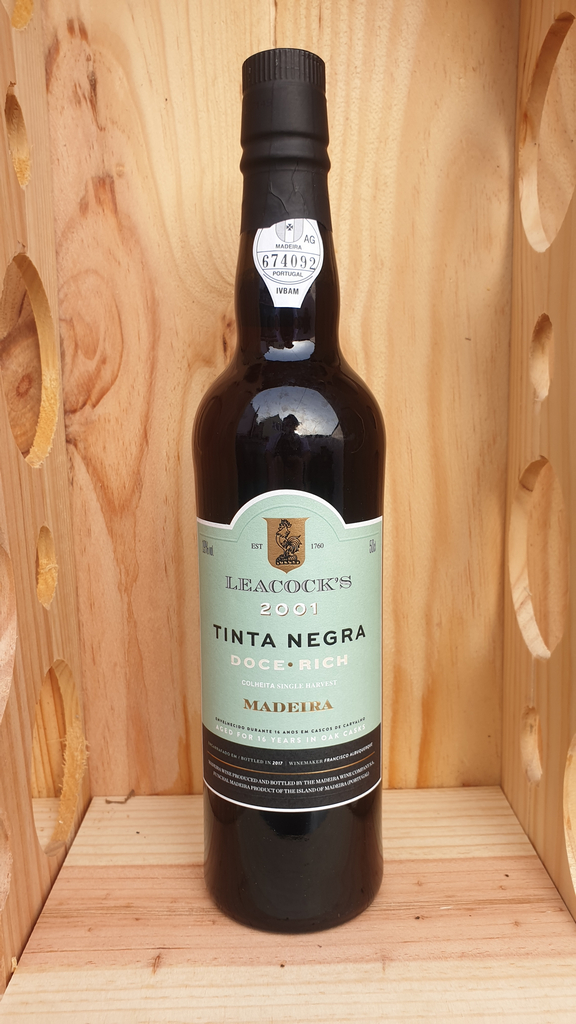 Leacocks 2001 Tinta Negra Colheita Madeira is a special order item and is only available in extremely limited quantities.

Leacocks Madeira is an historic Madeira company founded by John Leacock. Leacock worked as an apprentice at a Madeira merchant until March 1749. When his apprenticeship expired he started trading with an old school friend, John Patient, who was residing, at that time, in Charlestown, South Carolina and Leacocks Madeira was established. The company remained and importer Madeira company and passed through family hands until 1925 when Leacocks and Blandys amalgamated their interestes and joined the Madeira Wine Association, now the Madeira Wine Company, who also own Miles and Cossart Gordon Madeiras. Leacocks has been consistantly producing world renowned vintage Madeiras since 1760.

As a Colhieta Madeira Leacocks 2001 Tinta Negra Colheita Madeira is made from grapes harvested in a single year. A colheita Madeira is therefore a type of dated Madeira, like vintage Madeira. It has to be aged for a minimum of 5 years in barrels before it can be called a Colheita Madeira (for Colheita Port it is a minimum of 7 years). There is no maximum age limit for Colheita Madeira but after 19 years ageing it can then legally be called Vintage Madeira. The wine is aged in seasoned American oak casks in the traditional “Canteiro” system, whereby the casks were gradually transferred from the top floors of various wine lodges, where it is naturally warmer, to the middle floors and eventually to the ground floor where it is cooler during its maturation. The Canteiro method is only used for the highest quality Madeira, these wines are aged without the use of any artificial heat, being stored by the winery in warm rooms left to age by the heat of the sun. This barrel ageing gives the Colheita Madeira some of the character and complexity of a young vintage Madeira. Bottled under Madeira Wine Institute supervision.

Traditionally Madeira varies in style and sweetness depending on the grape variety that the Madeira is made from. Sercial produces the driest style, the rarer Tarrantez and Verdelho produce a Medium Dry style, Bual (sometimes call Boal) produces a Medium Rich style and Malvasia (also known as Malmsey) produces the richest and sweetest styles. Tinta Negra is another Madeira grape variety. It is used mainly in blended Madeiras (it accounts for around 90% of all Madeira production) but some producers also make single varietal  Vintage or Colheita wines from it. “Doce” means rich or sweet and, as the name suggests, this Madeira is made in the rich (sweeter) style.

Leacocks 2001 Tinta Negra Colheita Madeira is made from 100% Tinta Negra Doce and would make a perfect gift for anyone celebrating an anniversary from 2001. Only 2232 50cl bottled produced.