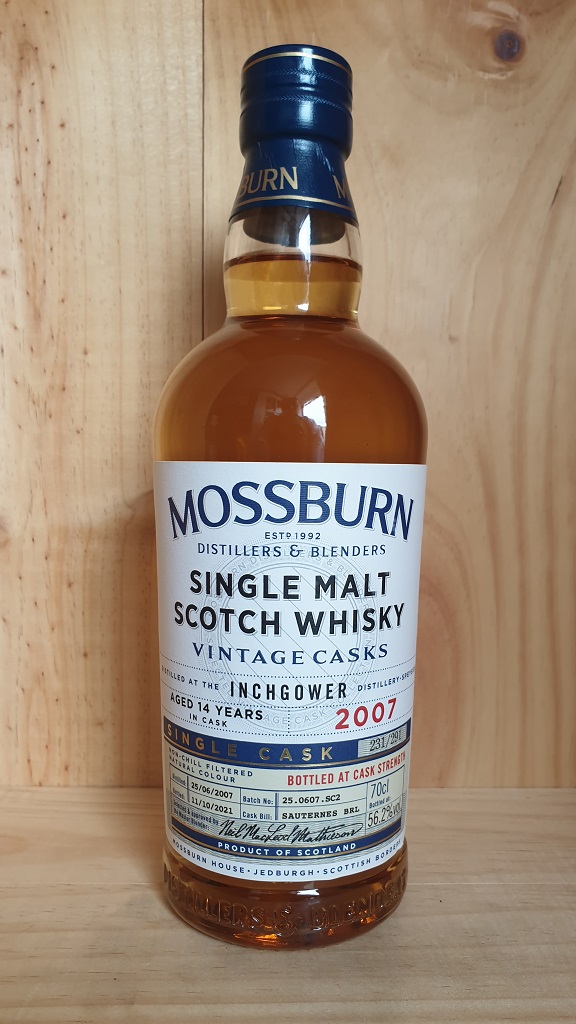 Mossburn Distillers & Blenders is a new Scotch whisky project owned by Marussia Beverage which is part of the empire controlled by Swedish billionaire Frederik Paulsen. The company is headquartered at Jedburgh in the Scottish Borders on the site of the former Jedforest Hotel. Their new distillery, called Reivers Distillery, will be one of the first new distilleries to be built in the Borders for over 150 years. Mossburn have also established Torabhaig Distillery on the Isle of Skye, which opened in 2017 (the second distillery on Skye after Highland Park). The parent company also own the Kaikyo Distillery in Japan which produces Hatozaki whiskies. Not content with this, they have also created the peaty Caisteal Chamuis whisky range. The first Mossburn bottlings were released in 2017.

The Inchgower Distillery is located on the outskirts of Buckie, Moray, Scotland and was originally built in 1871. It is classified as a Lower Speyside Malt and takes its water from a burn rising in the Menduff Hills to the south of Buckie. The distillery is owned by Diageo and today the whisky makes up a main component of Bell’s Blended Whisky.

Mossburn Single Cask Inchgower 2007 Single Malt Whisky is a single vintage, single cask bottling. The whisky was distilled in 2007 and bottled in 2021 as a 14 year old whisky. It has a Sauternes cask finish and is bottled at a cask strength of 56.2%. 291 bottles produced.