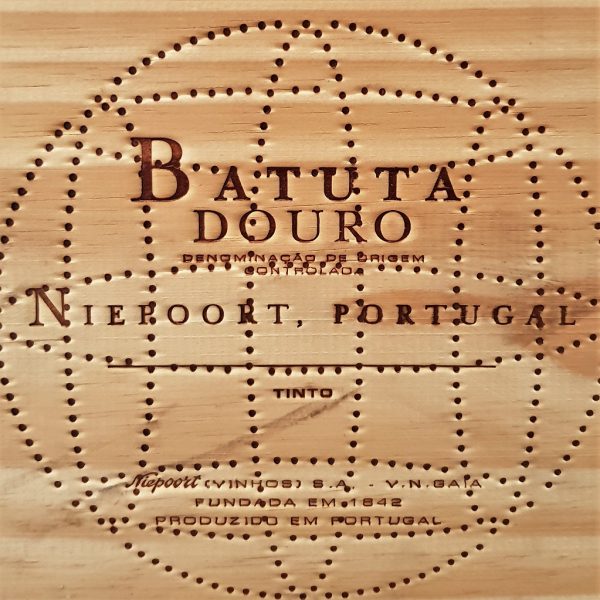 Niepoort Batuta is a red wine produced in the Douro by Niepoort Vinhos. The first vintage first released in 1999 with the intention producing an impressive yet elegant Douro wine.

Niepoort was founded as a Port House in 1842 and today is run by the 5th generation brother and sister Dirk and Verena Niepoort. Whilst they are style very well known for their superb Port wines, they are now considered to be one of the top Portuguese producers of table wines. Dirk really was at the forefront of the Portuguese wine revolution. He first started experimenting with wines in 1990 and releases his first wine, Niepoort Redoma Tinto in 1991. Dirk continues to experiment and innovate and produces some fantastic Douro wines as well as from relatively newly acquired vineyards in Bairrada.

The grapes for Niepoort Batuta predominantly come from over 70 year old, north-facing vineyards from Quinta do Carril whilst some grapes are sourced from from older vines (that are over 100 years old) planted at an altitude of 750 metres near the winery at Quinta de Nápoles. Both vineyards have schistous soils. Batuta undergoes a fairly delicate vinification with a longer maceration but with a little extraction to produce the elegance and freshness that the wine is renowned for. The grapes are harvested by hand and undergo selection in both the vineyard and the winery. Fermentation takes place in cone-shaped stainless steel vats and wooden barrels, with maceration for around 60 days. The wine is aged for 22 months in French oak barrels, 25% of which are new, and undergoes malolactic fermentation. It is a blend of Touriga Franca, Tinta Roriz, Rufete, Malvasia Preta and other Douro varietals.

Batuta, meaning the baton used by an orchestral conductor, proved to be the perfect name. Batuta demonstrates the most discrete behaviour, tannins are present but are fine and elegant, the aroma is very rich and intense but never exuberant. There is plenty of concentration from the old Douro vineyards but the wine remains fresh and elegant.

From Niepoort, “With an attractive ruby-red hue, the Batuta 2016 shows a bit more concentration and especially depth than the previous few vintages. Its deeply austere but complex aromas offer generous notes of fruits of the forest. Delicate floral nuances and a distinct mineral character are subtly underlined by a hint of oak. A distinguished and elegant palate with plenty of acidity is supported by a firm tannic backbone. Despite its youth, the wine impresses with its depth and precision, and a very long, elegant and seductive finish. This is a wine which promises to age gracefully.”

Batuta is a very flexible food wine and pairs well with meat and fish such as monkfish, squid and grilled octopus.

Be the first to review “Niepoort Batuta, Douro 2016” Cancel reply