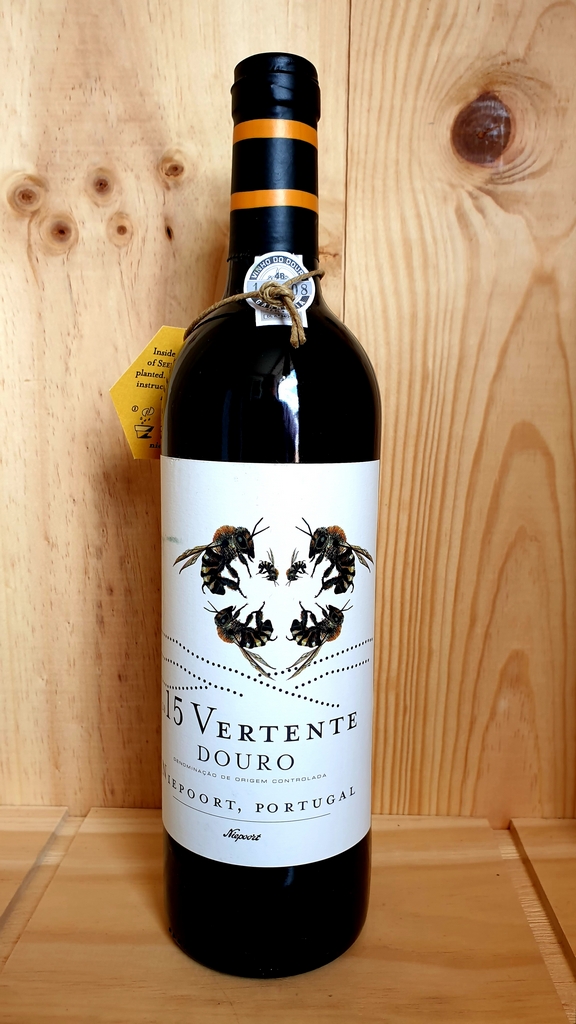 Niepoort Vertente Bee is a red wine from the Douro which was launched to celebrate the bee and its important as their role as key pollinators. Niepoort recognises that bees form an important part of our ecosystem and is actively try to keep this species alive.

Niepoort was founded as a Port House in 1842 and today is run by the 5th generation winemaker Dirk van der Niepoort. Whilst Niepoort is very well known for their superb Port wines, they are now considered to be one of the top Portuguese producers of table wines. Dirk really was at the forefront of the Portuguese wine revolution. He first started experimenting with wines in 1990 and released his first red table wine, Niepoort Redoma Tinto in 1991. Dirk continues to experiment and innovate and produces some fantastic Douro wines as well as from relatively newly acquired vineyards in Bairrada and Dao. All of the red wines, with the exception of the Niepoort Charme, are made at the futuristic winery at Quinta do Napole. Charme is made with the Ports at Vale de Mendiz.

The grapes for Niepoort Vertente Bee come from vineyards located on the right bank of the Douro. The wine is a blend of Tinta Amarela, Touriga Franca, Rufete and other grape varieties. After a meticulous bunch selection in the vineyards, the grapes were sorted for a second time in the cellar. The wine was fermented in conical stainless steel tanks before being left to mature for 22 months in French barriques where the wine also completed its malolactic fermentation.

Niepoort Vertente Bee was created in collaboration with British street artist Louis Masai, who is involved in several projects concerned with the conservation of various species of endangered animals. He is also in charge of the “Art of Beeing” project, which explores the beauty, uniqueness and importance of bees through several works of art. The label depicts a swarm of wild bees in the shape of a heart, and encourages you to plant flowers with every bottle in order to support the important role of pollinating bees. Each bottle comes with small packet of seed for you to plant to keep the bees happy (phacelia, clover, corn and dill), which can be planted in the garden or in a pot.

From Niepoort: “A beautiful, deep ruby colour matches the wine’s expressive aromatics characterised by minerality as well as dark chocolate and fruits of the forest notes. The wood is well-integrated, providing some hints of smokiness and spice. Tightly structured, profound, with a good backbone, this wine is elegant and fine on the palate, with well-integrated tannins, balanced acidity and a long finish. A vintage such as 2015 shows a fantastic balance between fruit and acidity as well as between body and smooth tannins. This is a great year for the Vertente, which will age superbly in the cellar.”