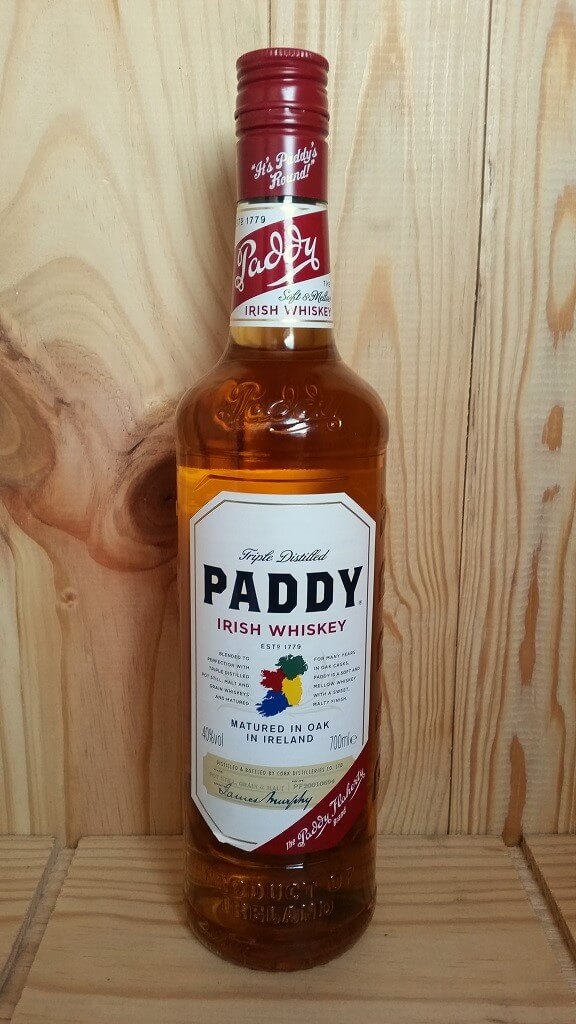 Paddy Irish Whiskey is made by Irish Distillers, a subsidiary of the French spirits company, Pernod Ricard SA. They are the largest producers of Irish Whiskey and also make Jameson, Powers, Midleton, Redbreast and Green Spot whiskies.

The origin of the Paddy Irish Whiskey brand name has a genuine Irish history. In the region of Munster, Cork Distilleries had a sales rep of some repute, Paddy Flaherty. As a true ambassador of the company, Paddy ensured that anyone who would cross his path would not escape without having savoured a glass of his whiskey. Publicans when low on stock would enquire at the Distillery for “Paddy Flaherty’s whiskey” and so it was not long until Cork Distilleries paid tribute to this genuine character by naming the whiskey “Paddy”. Irish Distillers was formed in 1966 when Cork Distilleries Company, John Jameson & Son and John Power & Son merged. The brand has been owned, since May 2016 by the American based Sazerac Company Inc. and is the 4th largest Irish whisky brand in the world.

Paddy Irish whisky is now made at Pernod Ricards Midleton Distilleries complex located in Midleton, County Cork, Ireland. It is one of the most modern distilleries in the world and has three 75,000 litre pot stills, and three column, which are used in combinations of three to produce different types of whiskey.

Paddy Irish Whiskey is distilled three times from the finest quality barley and water. It is a blend of three types of whiskey: single pot still, single malt & grain. The relatively low pot-still content and a uniquely high proportion of malt whiskey and is aged in oak casks for up to 7 years. This ensures a whiskey, which is particularly light, well balanced and pure.

Be the first to review “Paddy Irish Whiskey” Cancel reply