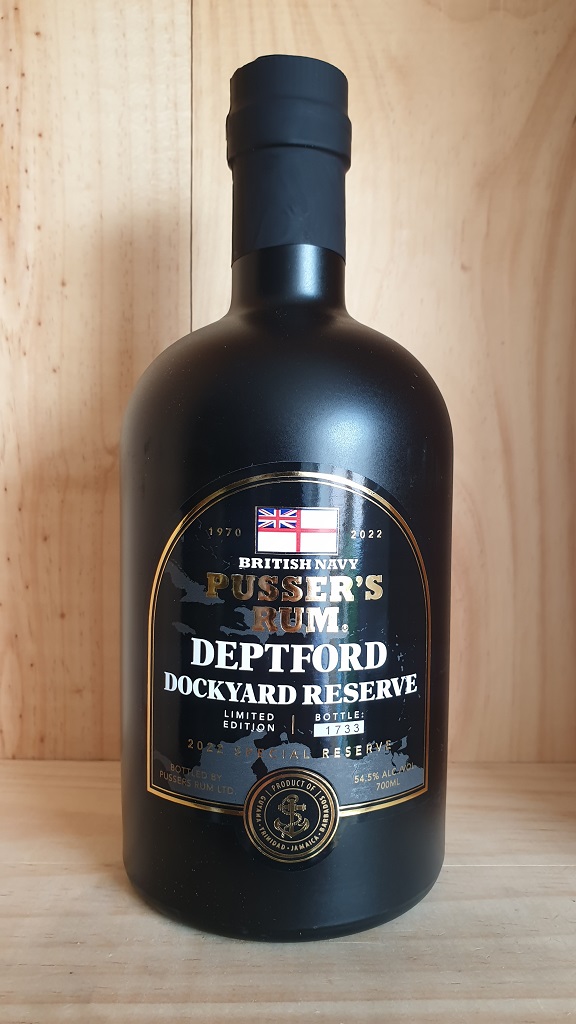 Pussers Rum Deptford Dockyard Reserve is a 2022 limited edition of Pusser’s Rum. It is bottled at a “Navy Strength” of 54.5% ABV.

Pussers Rum is produced by Demerara Distillers Ltd in Guyana and is named after the Royal Navy Slang for a purser, a ship’s supply officer. For more than 300 years sailors of the Royal Navy were issued a daily rum ration or “tot”, a highly welcome daily comfort when one was away from home for many months. The Rum Ration was abolished on the 31st July 1970 (“The Black Day”) and the Pusser’s Rum name quietly lay dormant until 1979 when the entrepreneur Charles Tobias sought to resurrect the Pusser’s Rum tradition. Tobias managed to obtain the rights and the blending information from the Admiralty, set up Pussers Rum Ltd on Tortola and, in 1980, began selling Pusser’s Rum to the public for the very first time. In return The Royal Navy Sailor’s Fund, a naval charity more commonly called the “Tot Fund” receives a substantial donation from the sale of each bottle of British Navy Pusser’s Rum.

Pussers Rum Deptford Dockyard Reserve is named after the important naval dockyard and base which is situated on the River Thames and operated between the 16th and 19th centuries. The base also comprised the HM Victualling Yard which was responsible supplying the Navy with food, tobacco, beer, medical supplies, clothing and, of course, rum. “Empire Rums” were sourced from British Navy rum suppliers from around the Empire including Demerara (Guyana), Trinidad, Barbados and Jamaica. The rums would be blended an aged for a further 2 years prior to being put into cask for distribution throughout the Navy. The yard had some 32 vats holding over 250,00 gallons of rum. There is an excellent article about the Navy’s vatting system at Cocktailwonk.com.

Pussers Rum Deptford Dockyard Reserve is a blend of aged, high-ester distillates from Caribbean countries in Great Britain’s naval past.

Finish: Christmas cake spices and dried fruit with a suggestion of sea salt that leads to a satisfying and dry Sherry finish.

Drink neat or try in a classic Rum Sour or Rum Negroni.