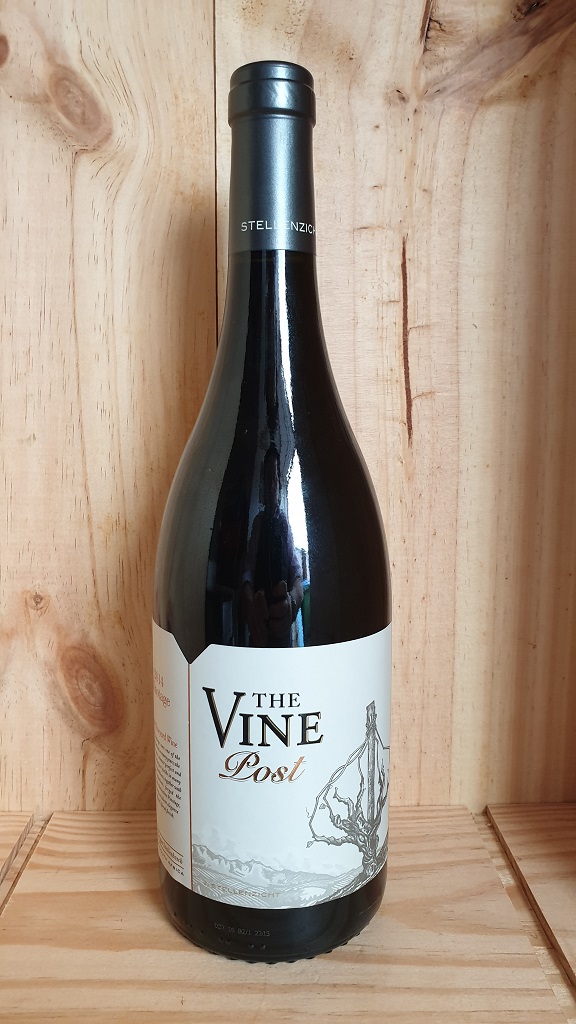 Stellenzicht The Vine Post Pinotage is part of Stellenzicht’s “speciality” range which also includes other excellent wines like the Plum Pudding Hill Syrah and The Mistaken Identity, a Pinotage / Shiraz blend. It is a single vineyard wine.

The Stellenzicht Estate is flanked by the Helderberg and Stellenbosch Mountain. Between Stellenbosch and the False Bay coast, lies an exceptional tract of land that benefits from terroirs eminently suited to the cultivation of the highest quality wine grapes. This jewel in the crown of the magnificent Stellenbosch wine-growing region is known as the Golden Triangle. At its core lies Stellenzicht.

The origins of Stellenzicht can be traced back to 1692  when it was part of a larger property granted to its first owner Barendt Hendrikse. The farm was bought by international banker and financier Hans-Joachim Schreiber in 1981. In 1999 he entered into a joint joint venture with Distillers Corporation which today forms part of Distell. The same partnership, called Lusan, also owned four other wine estates at the time: Le Bonheur, Uitkyk, Alto Estate and Neethlingshof. The estate was sold off by Distell in 2017 when it was purchased by one of the co-owners of Ernie Els wines, Baron Hans von Staff-Reitzenstein, and the fruit now goes into Ernie Els wines.  So grab their last remaining wines whilst you can!

The Stellenzicht The Vine Post Pinotage vineyard was planted in 2007 on nematoderesistant, Richter 99, rootstocks and at an altitude of around 380m above sea-level. Unlike all of Stellenzicht’s other Pinotage vineyards, this particular block is trained on a Stokby-Paaltjie system whereby each vine is supported on its own post – an ancient method of using a single post to support the vine’s canopy during the long summer months – hence the name “Vine Post”.

The Pinotage grapes are hand harvested, crushed and destemmed before fermentation in stainless steel. Both free run and press fractions are retained and undergo malolactic fermentation. After the completion of malolactic fermentation is tank, the wine was filtered before being transferred barrels for further maturation. Maturation took place in 100% new oak barrels of which 40% were French oak and the remaining 60% of Eastern European origin.. Total maturation time in barrel was 29 months before the wine was readied for bottling. Only 3716 bottles produced.

The elegance and fruitiness of Stellenzicht The Vine Post Pinotage allow for pairings with a variety of meat, game and poultry dishes with favour being given to crispy duck spring rolls with plum sauce and truffle or mushroom filo tartlets.

Stellenzicht The Vine Post Pinotage has a bright and dense ruby colour. The nose is dominated by clean red fruit with floral violets adding to the attractiveness. Touches of eucalypt and toasted oak round off the complexities. Medium-full in structure, the wine is rich in flavour without being bold in body. Its lean and succulent flavours end in a clean, dry and elegant finish with the supple tannins adding to the over-all length.