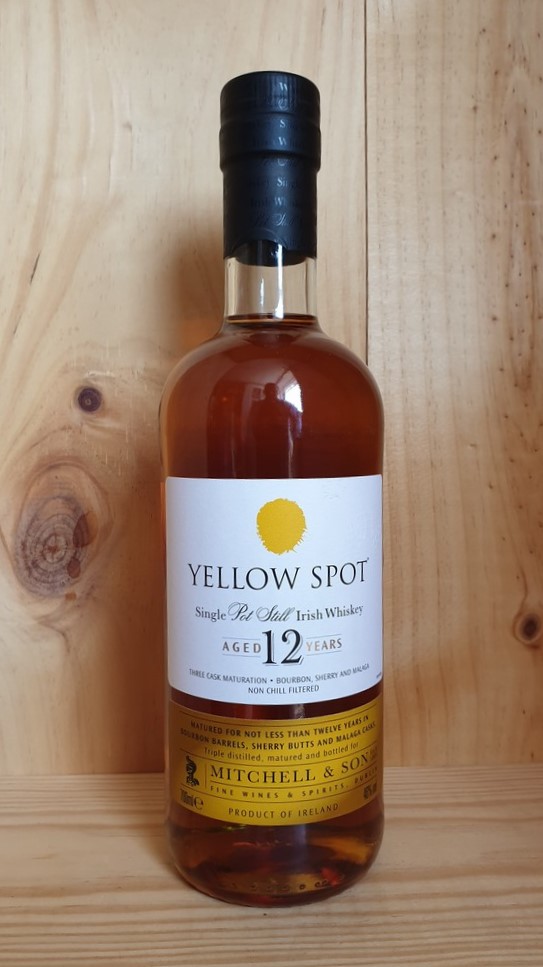 Mitchell and Son was founded at 10 Grafton Street in 1805 as a confectionary, wine and fortified wine business but it was not long before they entered the whiskey trade. The family would daub different casks of ageing whiskey with different coloured spots of paint determine the age potential of the whiskey. The Blue Spot was an 8 year old, Green a 10, Yellow a 12 and Red Spot a 15 year old. The 1960s version was a 12 year old the Yellow spot had a slightly sweet finish as part of the blend was single pot still whiskey aged in old Spanish Malaga casks. The wines of Malaga are similar to those of Jerez (Sherry) and there are some fantastic, sweet, treaclely, raisin-y dessert wines similar to Pedro Ximenez Sherries.

Each batch of Yellow Spot 12 Year Old Irish Whiskey is made from a mash of malted and unmalted barley, which is then triple distilled in traditional copper pot stills. Pot Still whiskies are characterised by full, complex flavours and a wonderful, creamy mouthfeel. The whiskey is then aged for a minimum of 12 years in a combination of American bourbon barrels, Spanish sherry butts and Spanish Malaga casks which lend an exotic, spicy note the blend. Only extremely limited quantities of Yellow Spot have been bottled making it a whiskey to seek out and savour as a true rarity. It is bottled at 46%.

While Green Spot is often described as tasting like green apples, Yellow Spot is more in character with juicy red apples. Sophisticated and complex in character, the inclusion of full term matured whiskey from ex Malaga casks contributes exotic characteristics to the whiskey.