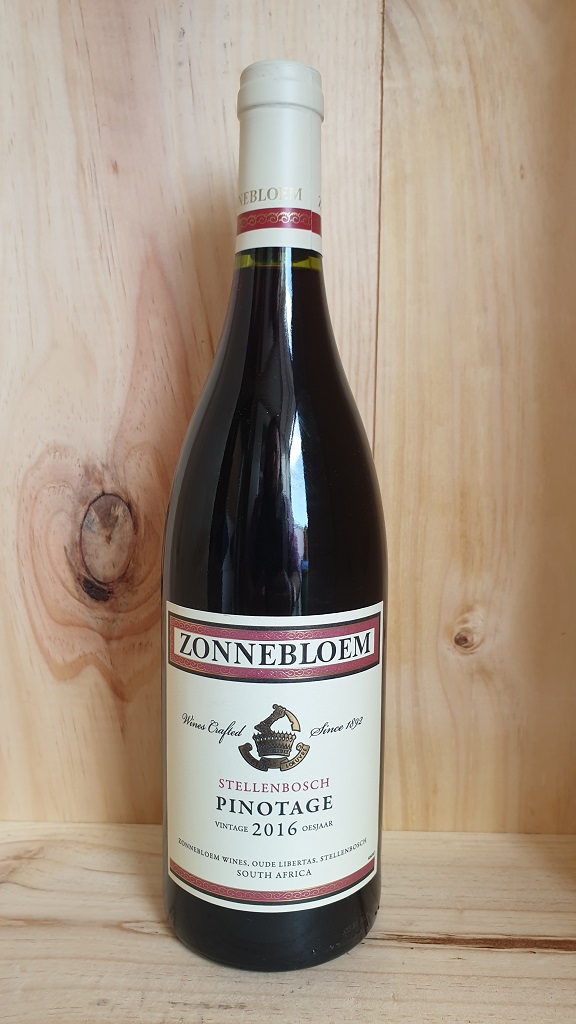 Zonnebloem Pinotage is a red wine from the Stellenbosch wine-growing region of South Africa. It is made from 100% Pinotage grapes sourced from trellised, dry land and irrigated vineyards in the Stellenbosch, Stellenbosch Kloof, Devon Valley and Somerset West areas.

Zonnebloem is an historic name in the South African wine industry. The farm that would later become Zonnebloem was founded in Simondium, Paarl in 1692. In 1856, then owner Petrus Malherbe divided the farm between his two sons and William Malherbe named his allocation “Zonnebloem” which translates into English as sunflower. The winery passed through various owners and was purchased by the Furter family in 1940 and when Marie Furter took over production she became South Africa’s first female winemaker. In 1963 Zonnebloem was purchased by the large South African drinks company Distell (they also own Nederburg and Plaisir de Merle amongst other properties) and remains in their ownership today. Today the grapes are sourced from 330 carefully chosen plots of vines and the company produces contemporary wines with more than a nod to the classics of the past. Perhaps as an homage to the first lady wine maker of South Africa, Marie Furter, the team at Zonnebloem is all female – Cellar Master Elize Coetzee is joined by Bonny Van Niekerk and Kelly-Marie Jacobs, the red and white winemakers respectively.

As mentioend above the fruit for the Zonnebloem Pinotage is sourced from trellised, dry land and irrigated vineyards in the Stellenbosch, Stellenbosch Kloof, Devon Valley and Somerset West areas. Some of the vines are grown under dryland conditions while others are irrigated. The vineyards are mostly south-west facing, they derive the maximum benefit from cooling maritime breezes that contribute to the slow ripening of the grapes and concentrated fruit flavours. The grapes were harvested by hand. Each vineyard block was individually vinified. After fermentation for 10 to 13 days, the wine was aged in a combination of small wood (55%) and in stainless steel tanks (45%). First and second fill 300 Litre American, French and Hungarian oak barrels were used for maturation.

Be the first to review “Zonnebloem Pinotage, Stellenbosch” Cancel reply