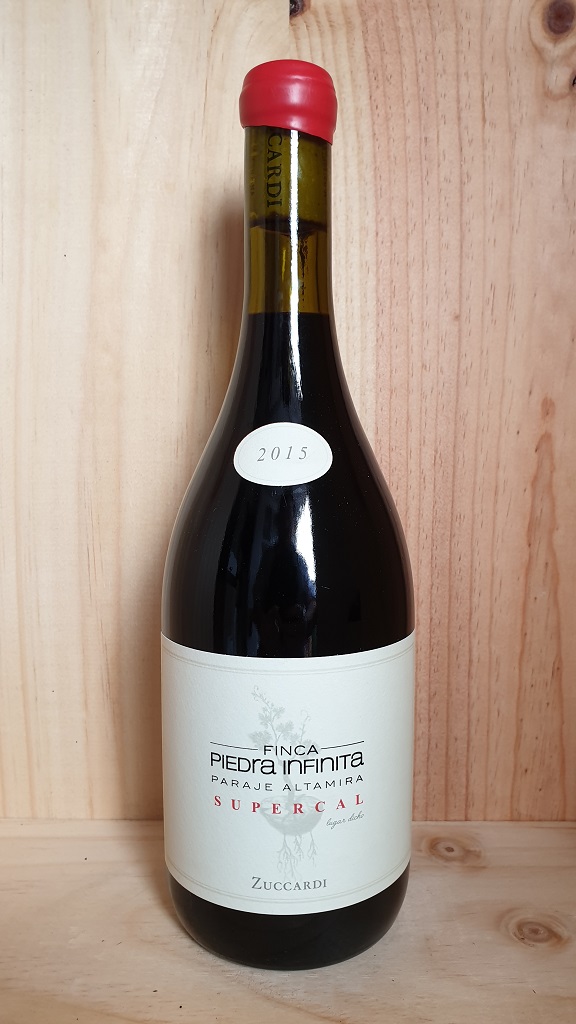 Zuccardi Finca Piedra Infinita Supercal is one of five wines from Zuccardi’s “Fincas” range. Each wine expressa the identity and uniqueness of a specific vineyard or parcel. Soil, climate and grape variety are the essence of these wines which speak firmly of the Valle de Uco. The other wines in the range are Finca Piedra Infinita, Finca Canal Uco, Finca Los Mebrillos and Finca Piedra Infinita Gravascal. They are described as “Pure Mountain Wines from Argentina”.

Zuccardi Wines was founded by Alberto “Tito” Zuccardi. Zuccardi was an engineer who had arrived in Mendoza from the Tucuman province of north western Argentina where his Italian grandparents had settled. Zuccardi was primarily working on irrigations systems which are very important in a region with minimal rainfall. In order to demonstrate his irrigation system he planted a vineyard in Maipu in 1963. This was to be the Zuccardi family’s entry into the world of wine. Constuction of their first winery began in 1968. Zuccardi was followed into the business by his son, Jose, in 1976 and Jose’s son, Sebastian, who is now the Zuccardi winemaker, joined the family business in 2002.

Zuccardi is based in the Valle de Uco and new winery was completed in Paraje Altamira in 2013. In 2019 Sebastian was voted one of South America’s most exciting winemakers by Decanter Magazine and Zuccardi Valle de Uco voted “The World’s Best Vineyard”. The Valle de Uco is located at the foot of the Andes and runs north to south along the western edge of the Mendoza wine-growing region. Zuccardi have several vineyard locations comprising some 800 hectares. As well as vineyards at the wine in Paraje Altamira, there are also vineyards in La Consulta, Vista Flores, Santa Rosa and Maipu. 35% of their vineyards have organic certification and the others are all sustainably managed.

The 100% Malbec grapes for the Zuccardi Finca Piedra Infinita Supercal are sourced from a small parcel of vines in the Paraje Altamira vineyard in the Valle de Uco, which has an alluvial soil with limestone-covered rocks from the surface down located at an altitude of 1100 metres above sea level. The grapes are hand harvested and the wine is vinified in concrete, without epoxy coating, using only indigenous yeasts. The wine is aged in used 500 litre wooden barrels.