A new name and packaging for Pussers Rum Blue Label 54.5%. Pussers Rum Gunpowder Proof will be launched in the UK in early 2015. As I write both Blue Labels (one at 40% and one at 54.5%) are available, so be careful which one you are buying! 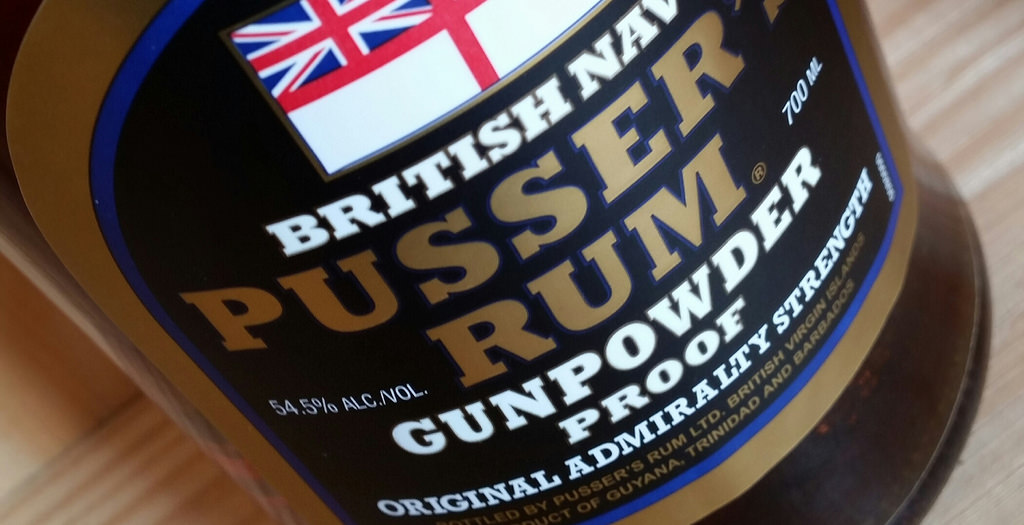 It may come as a surprise to some, but did you know that there are various different Pussers Rums bottled at different strengths? In the UK we have basically had a choice of 2 Pussers Rums – Pussers 15 Year Old Rum with a red label, bottled at 40% abv, and the Pussers Rum Blue Label which has always been bottled at 54.5% abv. The only other market in the world to take the 54.5% rum was Germany which I suspect is a hangover from the many Army bases and forces personnel we once had there.

In the meantime the rest of the world was drinking Pussers Rum Blue Label bottled at 40% or 42% abv (80 or 84 proof). Pussers Rum are undergoing a period of modernisation and change which means a certain consolidation, rationalisation and the release of a new product, Pussers Rum Spiced.

Therefore, the Pussers Rum Blue Label for the UK market will now be bottled at 40% and the old Blue Label 54.5% (it’s not disappearing, don’t fret) has been relabelled and rebranded as Pussers Rum Gunpowder Proof and will have a smart black and gold label, the abv remains at 54.5%.

Why are they doing this? I would think the release of the Spiced Rum and the new bottling of Pussers Blue Label at 40% are an attempt to connect with the younger generation of rum drinkers. It is certainly true (although we very near Portsmouth and Gosport) that currently the majority of Pussers Rum that we sell at Fareham Wine Cellar is bought by, or bought as a gift for, old sailors that most likely used to draw the Rum Tot in the Royal Navy. Obviously this generation of rum drinkers won’t be around forever and it is essential to get the younger generation of rum drinkers interested in Pussers. There are a couple of other very good reasons for reducing the alcoholic strength by volume down to 40%. Firstly, the lowered abv will allow Pussers to regain distribution on Naval bases where the maximum strength allowed is 40% abv – this will clearly open up what is a natural market for the rum. Secondly, due to the fact that duty is such a killer on spirits in the UK, the lowered abv will mean that the Blue Label will be able to be sold at around £22 a bottle rather than its current £32.50 (Fareham Wine Cellar price, correct 23/09/14). I can imagine this will make it a much more attactive price to both retails consumers and also to bars or cocktails bars who were previously put of by the relatively high price tag. Having not yet tried the new Blue Label, I cannot tell you have the two different bottlings compare.

Pussers Rum Gunpowder Proof is so-called due to a method of testing the quality of rum that formed part of British Navy wages in the 18th Century. In an effort to make sure that they were receiving good quality, high strength rum that had not been watered down, sailors would mix a little of the spirit with some gunpowder and try and set fire to it. If the alcohol in the rum was sufficient to allow the gunpowder to burn the flame with a blue flame was considered “proof” that the rum was good and strong. Any rum that would not catch alight would be considered “under-proof” and a rum that burnt more readily than normal, i.e. had a higher proportion of alcohol, would be considered to be “over-proof”. The minimum alcohol concentration that gunpowder would burn in was found to be 57.15% and this was considered 100 degrees proof. This was defined using one of the very first accurate hygrometers invented by Bartholomew Silkes in 1816. From these early beginnings of testing alcohol, the modern methods of alcohol by volume and proof are derived. However the Royal Navy decided that they would do things their own way and took an average of the strength of 100 samples of the diluted “proof” rum which gave them a strength of 54.5% abv. So actually the 54.5% bottling is not true Navy Strength as defined by the gunpowder test and this why is the Pussers Rum Gunpowder Proof has “Original Admiralty Strength” on the label bottle rather than “Navy Strength”.

Whilst mentioning Pussers Rum Gunpowder Proof it is also worth mentioning Navy Strength Gin. Navy strength gin must be bottled at no less than 57% abv. At Fareham Wine Cellar we stock two Navy Strength gins – Plymouth Navy Strength Gin from the UK and Leopolds Navy Strength Gin from Colorado in the USA. Both are bottled at 57%. I assume that Navy connection in the name comes from the similar thing to the Gunpowder Proof rum, after all gin was a very popular Navy drink. However various sources state that this strength derives from the fact that gunpowder could be lit if Navy strength gin was spilled on it – somehow I doubt if there was much gin sloshing around gun decks during battle. It is most likely derived from being tested, like the rum, as being gunpowder proof.