Pusser’s Rum is produced on Tortola in the British Virgin Islands and is named after the Royal Naval Slang for a purser, a ship’s supply officer. For more than 300 years sailors of the Royal Navy were issued a daily Rum ration or “tot”, a highly welcome daily comfort when one was away from home for many months. The Rum Ration was abolished on the 31st July 1970 (“The Black Day”) and Pusser’s Rum quietly lay dormant until 1979 when Charles Tobias, entrepreneur, sought to resurrect the Pusser’s Rum tradition. Tobias managed to obtain the rights and the blending information from the Admiralty, set up Pusser’s Rum Ltd on Tortola and, in 1980, began selling Pusser’s Rum to the public for the first time (previously it was Royal Navy only).

What is Pusser’s Rum?

Pusser’s Rum is the same Admiralty blend of five West Indian rums as issued on board British warships, and it is with the Admiralty’ blessing and approval that Pusser’s is now available to the consumer. In return The Royal Navy Sailor’s Fund, a naval charity more commonly called the “Tot Fund” receives a substantial donation from the sale of each bottle of British Navy Pusser’s Rum. Aside from the fund’s original bequest, the Pusser’s contribution has become the fund’s largest source of income.

Today’s Pusser’s is still produced in exact accordance with the Admiralty’s specifications for rum. Unlike most rums, Pusser’s uses no flavouring agents. It is 100% natural.  Fun fact: it is made in the same stills as El Dorado Rum. Pusser’s is said by connoisseurs to be more like a fine brandy than a rum, with a full, rich flavour and a smoothness which are unsurpassed.  It is a sipping rum, which, of course, may also be mixed. Its full mellow flavour comes through anything you might mix it with. Either neat or mixed, you will notice and enjoy the full, rich flavour of Pusser’s rum.

NOW DISCONTINUED WITH THIS LABEL – rebranded as Pussers Gunpowder Proof Rum with a black and gold label.

Distilled in traditional pot stills, Pusser’s Blue Label British Naval Rum is bottled at the higher strength of 54.5%. It is a unique dark rum, with a rich nose full of dried fruits, prunes and really ripe figgy notes. There are also notes of toffee, apple, cold tea and leather. The full, complex palate is sweet and reminiscent of stewed fruits with an incredibly long finish.

This is really a sipping rum, excellent on its own or, for a surprising match, try with mince pies!  ‘Best Dark Rum’ – Gold Medal Winner WSF 2002. Double Gold Winner – World Spirits Competition 2003.

Pusser’s 15 Year Old Red Label British Navy Rum is aged not only for 15 years in wood, but has also been distilled in wood. It is the world’s only rum, or for that matter the world’s only spirit, that is still predominantly distilled in wood using the old, expensive, inefficient, handcrafted way in opposition to the modern column distillation. Its production is similar to that used for single malt whiskies and the finest brandies, to impart a fuller, richer flavour. It is softer, smoother, mellower and lighter than the Pusser’s Blue Label – it is identical to the rum that was issued in the Royal Navy. It has a golden brown colour. The nose is full and fruity with aromas of marmalade, apricot, spice (cinnamon), vanilla, cream, black pepper,  citrus, raisins and rancio (think Cognac). The palate is full, soft, quite sweet and rounded with notes of spice, vanilla, black pepper, nuts (brazil), molasses. Slightly oily and oaky with intriguing banana flavours. Savour on its own or perhaps with a fine Cuban cigar.

In 2005 Pusser’s Rum celebrated the Nelson Bicentenary, when Lord Nelson fought The Battle of Trafalgar on 21 October 1805 off Cape Trafalgar near Cadiz, Spain. Legend had it that Nelson’s body was placed in a large cask of Pusser’s Rum to preserve it for the long voyage back to England. Upon arrival, the cask was opened and the body removed. But the rum was almost gone. The jack tars (sailors) had drilled a small hole at the base of the cask through which they drained most of the rum, thereby drinking of Nelson’s Blood. Since then, the term Nelson’s Blood has become synonymous with Pusser’s Rum. The Royal Navy Toasts on the back of the flask are those that have been offered for more than 200 years. They are still offered today at dinner on board Royal Navy ships and shore installations. The four flag signal to “SPLICE THE MAIN BRACE!” was flown to signify a double issue of rum. 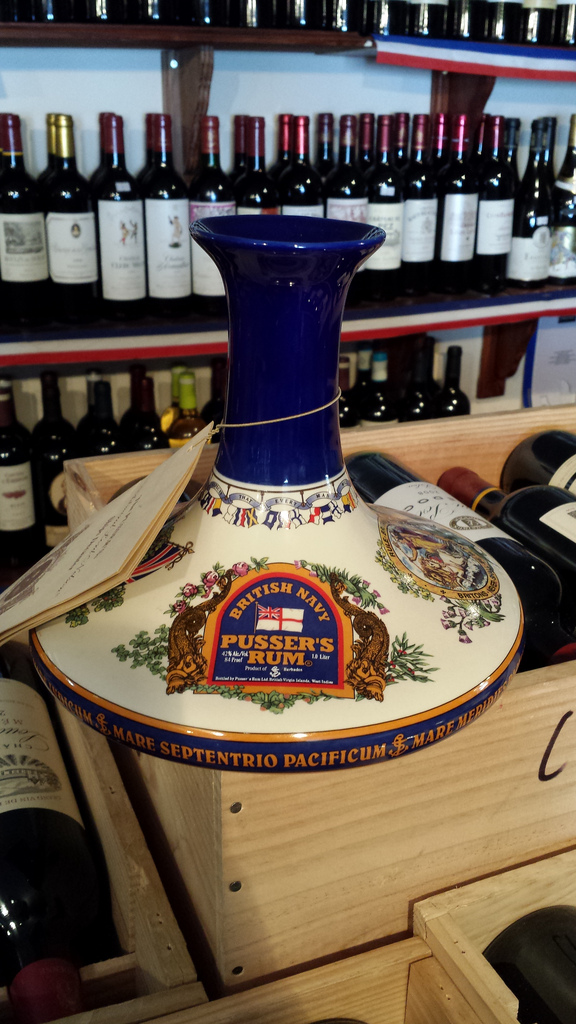 Pussers  “Admiral Lord Nelson” Ship’s Decanter replicates a classic wide-bottomed shape favoured for ships. Ships decanters had their beginnings in the early naval sailing ships of the Royal Navy, and it would have been an exception to have found a captain’s cabin without one- from the smallest to the largest vessel. The general shape began to develop sometime in the second half of the 18th century, and nothing much is heard of them until a well-known British Admiral by the name of Rodney introduced one at a victory celebration on board his flagship following the famous Moonlight Battle and the Battle of the Saints in 1780 and 1782. His decanters had an especially broad base, some of them up to 12-inches in diameter, to ensure stability when used at sea in wardrooms or officers’ cabins. It’s said that the true test of a ship’s decanter is when the shortest distance from the outer edge of the pouring lip to the edge of the base be equal to or greater than the outer circumference of the pouring lip. This was the “Rodney” test. The decanter features The Royal Naval Toasts, the flag signal “England expects that every man will do his duty” that Nelson sent prior to Trafalgar, as well as other various inscriptions.