Please note that we are closed on Tuesday 18th February. We will be open, as normal, from 10am on Wednesday 19th February. Apologies for any inconvenience caused.

The Pussers Rum Yachting Decanter is a commemoration of the sport of modern yacht racing, which can trace its history back to the 1600s. The decanter depicts many of the modern rigs used in sailing and some one-off designs. The artwork was painted by one of the world’s most famous marine artists A.D. Blake from New Zealand. 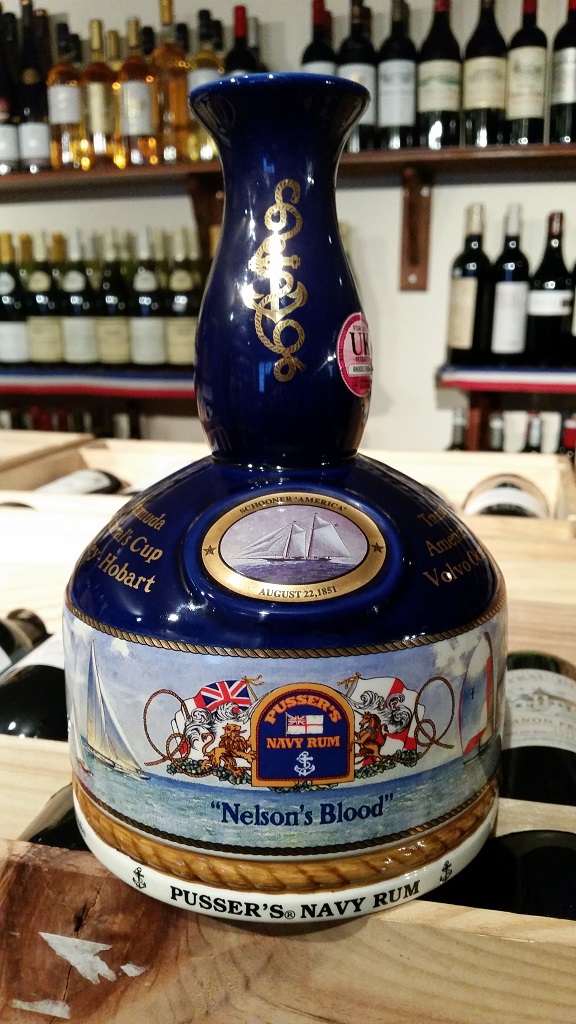 On the shoulders of the decanter one can find some of the most prestigious yacht races in the world, including,

The comes with a large ceramic stopper which has the Pusser’s Navy Rum life ring logo on the the top. Around the sides there is the flag signal for “Splice the Main Brace”. There is also the Killick’s Fouled Anchor, the official anchor of the Royal Navy which is repeated on the decanter’s neck.

Pusser’s Rum is produced on Tortola in the British Virgin Islands and is named after the Royal Naval Slang for a purser, a ship’s supply officer. For more than 300 years sailors of the Royal Navy were issued a daily rum ration or “tot”, a highly welcome daily comfort when one was away from home for many months. The Rum Ration was abolished on the 31st July 1970 (“The Black Day”) and Pusser’s Rum quietly lay dormant until 1979 when Charles Tobias, entrepreneur, sought to resurrect the Pusser’s Rum tradition. Tobias managed to obtain the rights and the blending information from the Admiralty, set up Pusser’s Rum Ltd on Tortola and, in 1980, began selling Pusser’s Rum to the public for the first time (previously it was Royal Navy only).

British Navy Pusser’s Rum is the same Admiralty blend of five West Indian rums as issued on board British warships, and it is with the Admiralty’ blessing and approval that Pusser’s is now available to the consumer. In return The Royal Navy Sailor’s Fund, a naval charity more commonly called the “Tot Fund” receives a substantial donation from the sale of each bottle of British Navy Pusser’s Rum. Aside from the fund’s original bequest, the Pusser’s contribution has become the fund’s largest source of income. Today’s Pusser’s is still produced in exact accordance with the Admiralty’s specifications for rum. Unlike most rums, Pusser’s uses no flavouring agents. It is 100% natural. Pusser’s is said by connoisseurs to be more like a fine brandy than a rum, with a full, rich flavour and a smoothness which are unsurpassed. It is a sipping rum, which, of course, may also be mixed. Its full mellow flavour comes through anything you might mix it with. Either neat or mixed, you will notice and enjoy the full, rich flavour of Pusser’s rum.

Please Note we are having problems taking orders online at present. For any orders please could you either phone us on 01329 822 733 or email [email protected]k and we'll be able to help. We apologise for the inconvenience and should have this resolved very shortly. Dismiss