Following the success of Twisted Nose Gin, it had to happen didn’t it? The Twisted Nose range of spirits has now grown to include a Barrel Aged Gin, a Wasabi Vodka and a Vermouth made with wine from Danebury Vineyards.

Buy online and in store at Fareham Wine Cellar.

This small batch handcrafted vodka is made using a pure grain natural spirit which is then infused by maceration of freshly grated wasabi and seven other complementary botanicals. The infused spirit is then redistilled in a traditional copper pot still to produce this clear, smooth vodka. 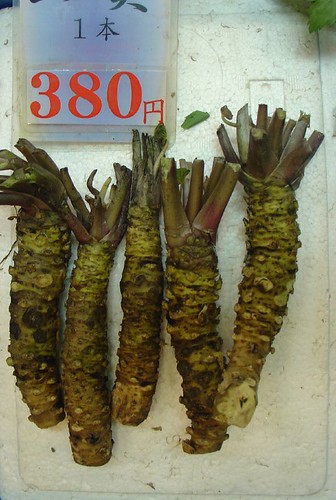 flickr photo shared by EverJean under a Creative Commons ( BY ) license

Wasabi (Eutrema japonicum), also known as Japanese horseradish, is a member of the Brassica family which includes cabbages, horseradish and mustard. Traditionally the plant would grow alongside stream beds in nutrient-rich, quick flowing mountain river valleys in Japan. However, the wasabi for the Twisted Nose Wasabi Vodka is a touch more local – it is cultivated in Hampshire and Dorset by The Wasabi Company who use a superior cultivar called “Sawa”. Wasabi is used as a condiment, famously for sushi in Japanese cuisine, but it now finding its way more and more into international cuisines.

As you might expect Twisted Nose Wasabi Vodka has a pretty spicy character to it. It is a pure clear colourless vodka. The fragrant nose has a slightly sweet, salty tang with a hint of citrus, definitely erring on the savoury side. The palate is spicy with a pleasantly peppery kick and warming finish. It is spicy, but more gentle than fiery. The finish has a good length and is pure and clean. Quite subtle compared to some spicy vodkas. Bottled at 40%.

Paul Bowler of Winchester Distillery recommends substituting your normal vodka for Twisted Nose Wasabi Vodka in a Bloody Mary Recipe. It would also make a fantastic drink on its own. Straight from the freezer I can imagine it being a great match for caviar or smoked dish fishes, maybe even beef carpaccio (after all beef is a natural partner to English horseradish). It would also be good in a Martini.

Add all the ingredients and some ice to a cocktail shaker, shake vigourously and strain into a chilled martini glass. Garnish with lemon peel.