There are many types of Madeira, but recently I was asked by a customer about Solera Madeira Wine and I have to say I didn’t know much about it, so I did a bit of research….. it is a very old and rare style. The production of this type of Madeira shares some methods of Sherry, and Malaga, production but does not mirror it completely.

How is Solera Madeira Made?

Madeira wine from a single vintage forms the basis for Solera Madeira. In early production one tenth of the contents of a cask were taken out and replaced with the same amount of a younger wine. This process could be repeated up to a further ten times and then the contents of that cask had to be bottled. Originally the wine used for re-filling the barrels could come from 10 consecutive years but for later Soleras the wine used would be from 10 consecutive good vintages. 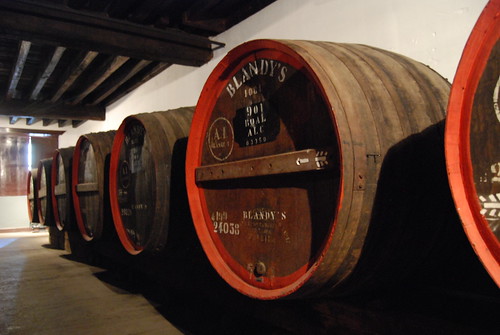 More recently, modern Solera Madeira follows the model of the Sherry Solera more closely and much more wine is allowed to be removed and replaced, this allows for a greater production, but many people feel that new Solera Madeiras do not have the complexity and sought after qualities of the old Soleras.

When you see a Solera Madeira it will have a vintage on it such as the Blandys Verdelho Solera 1870.

Only a small amount of the wine in the barrel will be from the original 1870 vintage however, the other wines will still be of a similar great age. This can be a difficult concept to grasp and buyers should really be made aware that his is not a single vintage product. It should be noted that you never see single vintage Sherries.

From the 1980s Solera Madeiras are no longer allowed by EU regulations although, perhaps due to the point mentioned above, but they are still available in Madeira and they do occasionally make their way over to the UK.

These Madeiras are definitely worth tracking down, they are superb, complex Madeiras and there aren’t many of them left!!

Social Distancing - We are now open during our normal shop hours. We are operating a one in one out policy (couples / cohabitees are okay too), so if you can see someone in the front of the shop please wait until they have been served and have left before entering. Please use the hand sanitiser provided and refrain from touching the bottles if possible. Keep a safe space between yourself and our staff. Please telephone 01329 822733 for information about local deliveries or if you have any further questions. Dismiss